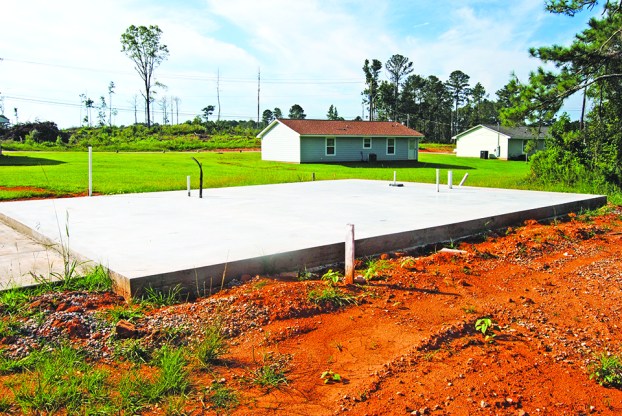 LANETT — The Chattahoochee Fuller Center Project has already had a productive year in 2018 with two new homes being built, but they are only halfway through. Work will start on two new homes this month, and both should be finished by the middle of October.

“I can’t believe we are about to build homes No. 41 and 42.” said CFCP Executive Director Kim Roberts. “I am so excited. We are so blessed to have the kind of support we receive from this community.”

Work will start next Thursday, Sept. 20th on No. 41. It will be on Huguley Road in Valley and will be the fifth new home to be built there in recent years. It will be part of a neighborhood transformation success story. Where there once was a trailer park that drew plenty of complaints from neighbors and lots of visits from police, there’s now a neighborhood of new homes.

Volunteers from the First Baptist Church of Valley will take the leading role in building No. 41. Doug Dewberry, who’s a member of the church, will be the house captain.

No. 42 will be going up in West Point on East 7th Street.

The site is across the street from a cemetery and can be easily seen from Martin Luther King Drive. Mayor Steve Tramell will be the house captain.

Assisting him will be volunteers who work at Knauf and Norbord.

The house is being built in memory of the late Cliff Glover, who was very supportive of such causes as the Fuller Center.

Volunteers from Refuge Point Church are building the walls for the houses today.

The Valley’s venerable roofer, Cecil Ramsey, is also looking to keep his perfect record going. He’s done the roofing work on all 40 CFCP roofs and plans to do the work for 41 and 42.

“It should take us a day-and-a-half to have the houses dried in,” Roberts said. “We think we will have both of them completed the week of October 8. Our cities are so supportive of us. In Valley, they got the land for us and cleared the lot. East Alabama Water helps us with the water hook ups. We are so blessed to receive the support we do from our cities, businesses, individuals and church groups. We are so thankful that Coca-Cola provides the drinks for our volunteers and churches provide the meals for them. These kinds of donations helps us with our costs. The more help we can get, the more houses we can build.”

Roberts is also grateful for the community support the ReUse Store receives.

“We celebrated our fourth anniversary in April, and business continues to be great,” Roberts said. “We’ve brought in over $100,000 a year every year we’ve been open. It’s amazing the donations we get for our store. Anybody can afford to shop here. We are still learning, but it’s been great so far. We are staying really busy. Between our builds, working with our families and the store, we have a lot to do every day.”

Roberts loves to talk about the Fuller Center and has done that at lots of churches in the local area.

“It’s exciting to know that our churches are so supportive of what we are doing,” she said. “They really help us with our builds.”

Roberts is in her ninth year with the CFCP.

She said it doesn’t seem that long, but she does stay busy all the time.

BEULAH – The Bobcats had four reasons to arrive at Beulah’s homecoming dance in a good mood on Friday night.... read more