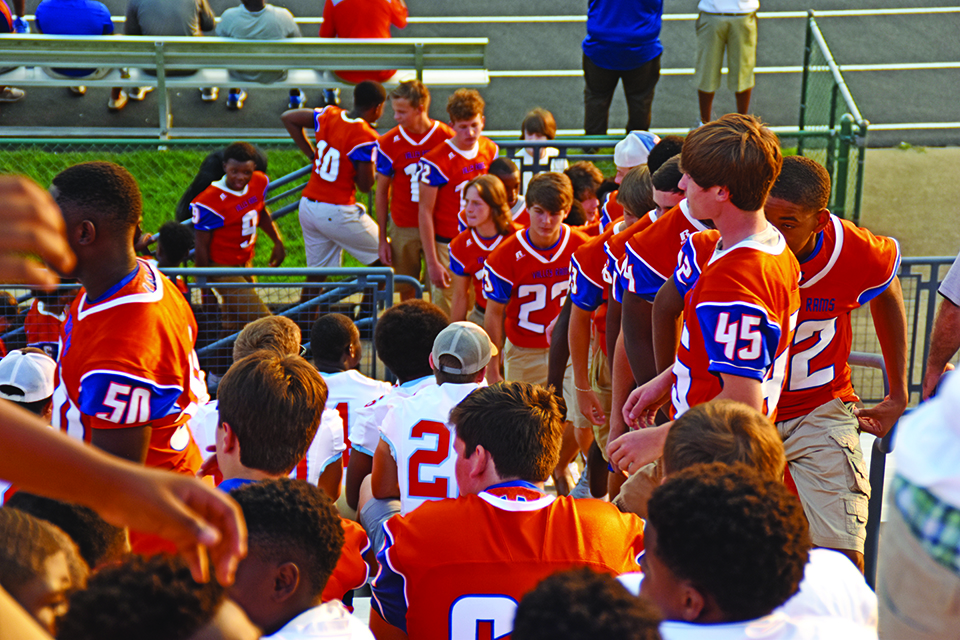 VALLEY — The Valley ninth grade team tied with Benjamin Russell in a scoreless game on Tuesday that was called one minute into the fourth quarter, due to the night’s thunderstorms.

“Our special teams were excellent this week,” Valley ninth grade head football coach Thomas Hill said. “We did a great job of improving on those compared to last week. The defense was phenomenal. It was about as good of a defensive performance that I have seen.”

“Good defenses don’t rely on one or two people,” Hill said. “There’s pretty much a playmaker at every position and I feel like we have that. If one person doesn’t necessarily make a play that one down, there’s somebody else that’s right there nipping at the bit and [assistant] coach [Mike] Power has done an amazing job calling up blitzes. I think we have some crazy good personnel on the defensive side of the ball. I haven’t seen anybody be able to run on us at all this year and that’s just a credit to how determined these guys are, if they get upset, they punch that line of scrimmage.”

The Rams first drive lasted all but two minutes of the first quarter.

Valley once again leaned on the shoulders of its backfield with Tykale Foreman garnering 11 carries, Kalen Sherrell and M.J. Atkinson got three carries each in addition to grabbing some receptions as well. Atkinson started the game at quarterback and also completed a pass in four attempts in the matchup.

“Offensively, we’re still not hitting our stride yet,” Hill said. “We still have to work on our assignments a little bit more. It’s one of those things where you’ll have 10 players right but someone on every play gets something wrong and it’s costing us possessions. We were moving the ball a couple of times, but one mistake and it’s costly.”

The best opportunity for a Valley score was before halftime on the three-yard line when quarterback John White threw an interception as time expired in the first half. White recovered, however, and ultimately made a game-saving tackle on the Benjamin Russell defender.

White went 2-for-4 for 30 yards through the air on the night.

Next Monday, the ninth-grade Rams return to action with a road game at Auburn, which will begin at 6 p.m. EDT.