Valley out sized by experienced Brewbaker 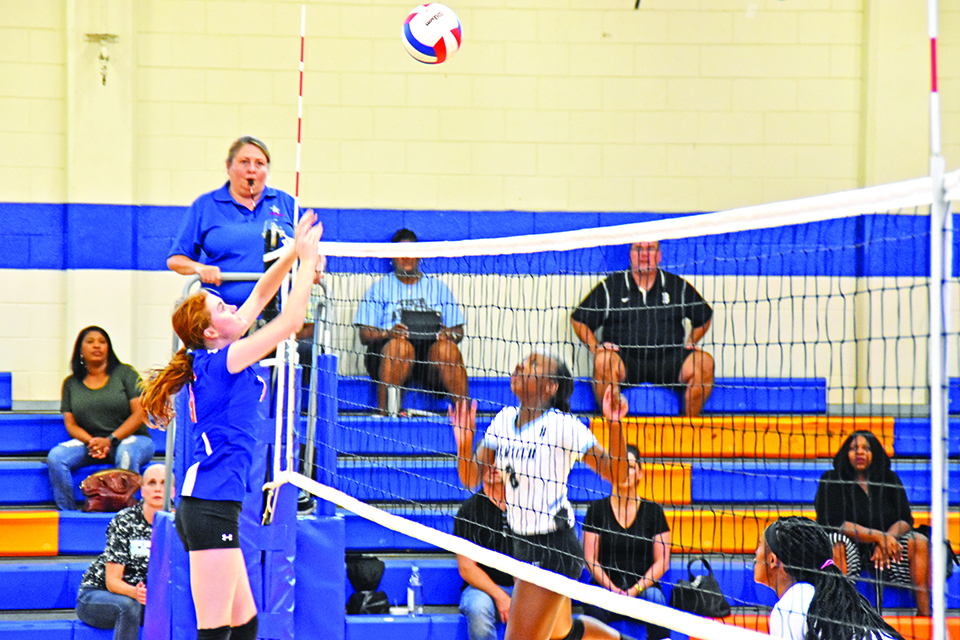 JUMP BALL:A Brewbaker Tech player places the the ball in one of Valley’s gaps on Thursday afternoon. Photo by Rashad Milligan

It appeared as if Valley was going to steal the second set, holding up a 24-18 lead at one point. Brewbaker, however, responded to every Valley counter-attack and outlasted the Rams for the victory.

“I’m just proud of the girls,” Valley junior varsity head volleyball coach Summer Lewis said. “They fought, we overcame a little adversity. We had together as a team for sure because of the first set, kind of fell short but I’m proud of them coming together in the end.”

The young varsity was simply no match for Brewbaker.

The opponents were bigger, taller, quicker and more powerful overall. Senior middle hitter Briauna Thompson stands at six-foot-three-inches. Thompson will probably attend college next year on a basketball scholarship, her parents said after the match.

“With a team of that caliber, it’s not that we necessarily don’t stand a chance, we stand a chance but they need to play with heart,” Valley varsity head volleyball coach Fern Piper said. “As long as they play with heart they can go home without thinking that they didn’t give it their all.”

Valley didn’t give up on the court, regardless of the score during the match. The Rams kept heads held high and the occasional smiles on their faces as the bleachers emptied from the Valley faithful.

Thompson, in addition to other tall Brewbaker outside hitters, just spiked the ball, communicated and placed the ball in gaps at speeds the Rams have yet to see up to this point of the season.

“We don’t get to play teams like that very often to be able to learn how to move and make that kind of defense happen,” Piper said. “When we have the opportunity to use that, I keep telling them, ‘keep your chins up. Play the game, play with your heart and learn because that’s all you can take away from it.”

Moving into holes, not fearing spiked balls and working together were three main lessons the Rams learned on Thursday night, according to Piper.

“I was really happy with the steps they made today even though we had a big loss,” she said.

Valley’s varsity team has five seniors, one who played all four seasons, one who last played two years ago and three who are playing the sport for the first time. The rest of the roster is filled with juniors, many who also don’t have any experience playing volleyball.

The next match for the Rams will be back at home on Monday afternoon against Notasulga.