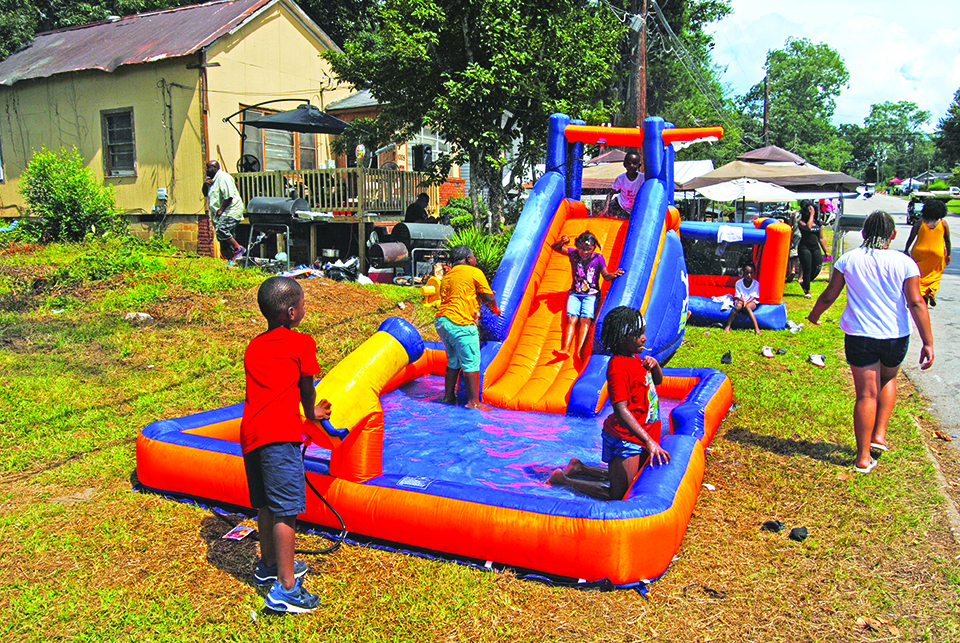 WEST POINT — An estimated 500 people were in attendance for a Labor Day weekend fun festival on East 9th Street in West Point. Most of the people at the end-0f-summer party were from the local area, but some came from far away as New York, California and Ohio – people with strong family ties to West Point who like to come back to mingle with long-time friends.

This was the second annual West Point Day, and from the looks of things, it may well be an annual event to celebrate the connections people have with the town.

Organizing the event was West Point Vision, a non-profit with a goal of giving back to the community through non-violent events that can be enjoyed by anyone.

“Everything here is free, and everyone is having a good time,” said Richard Chapman.

The big party took place in a sprawling area of East 9th Street between Avenues G and L. The street was blocked off at each end with West Point Police Department vehicles. Lots of tents were set up along East 9th and on side streets running into it. The air was filled with the smells of chicken and ribs on the grill. An estimated 30 golf cars and Gators transported people throughout the area. The Jackson’s Heating & Air all-weather tent was there to give people a break from the heat.

“I smell some good chicken!” shouted DJ Ice between the classic soul and R&B songs he was playing. There were lots of smiles and laughter and enjoying good food on the traditional end of summer U.S. holiday weekend.

“We like to do this on Sunday afternoon,” Chapman said. “People can have fun today and rest tomorrow before going back to work on Tuesday.”

Judging from Sunday’s turnout and the good times everyone appeared to be having, it was a great idea for a massive get together.

West Point Vision has a one million dollar insurance policy that covers the event. The street is blocked off at both ends to keep out vehicles.

“We have a lot of children in the area,” Chapman explained. “We don’t need any vehicles trying to get through. The only thing that’s allowed are the golf carts that take people from one end to the other.”

Lots of kids enjoyed going down a sliding board into a wading pool. The adults enjoyed relaxing to the sounds of music playing and being with friends and family. DJ Ice and the Slow Talkin’ DJ kept everyone entertained on the sound system, and in the late afternoon, a local band performed on a stage.

The popular t-shirt for the day was one that proclaimed: “All Roads Lead to West Point.”

Those who missed out should remember to mark on their 2019 calendars the day before Labor Day as West Point Day.