Zimbabwe students come to US, play with Point tennis team 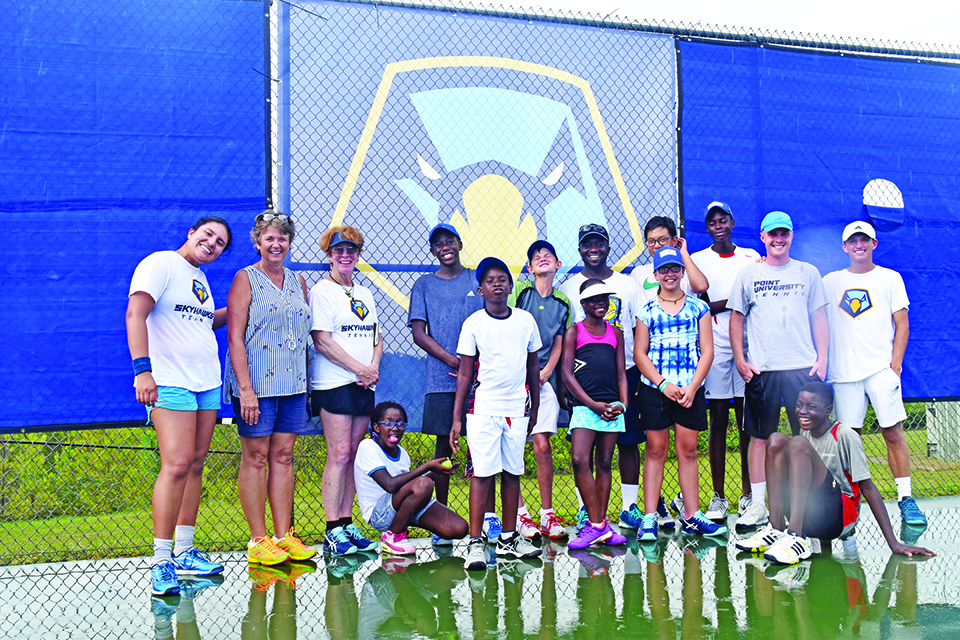 ALL SMILES: Jane Beaty, members of the Point men’s and women’s tennis teams and the Elite Tennis Village from Bulawayo, Zibabwe pose for a picture on Wednesday afternoon. The scheduled competition between the two programs ultimately had to be cancelled due to rain. Photo by Rashad Milligan

VALLEY — A group of nine students from Zimbabwe joined the members of the Point University men’s and women’s tennis teams for friendly competition on Wednesday afternoon.

“It’s been wonderful,” Point assistant tennis coach Jeri Stewart said. “We’ve been able to go there, I’ve been there seven times, but this is the first time they’ve come here. We’ve been trying to bring the city here with [Point University head tennis] Coach Chad [Simpson] and in Columbus as well, bring some coaches together to give them an opportunity with tennis.”

The students come from the Elite Tennis Village, which is based at the Whitestone Primary School in Bulawayo, Zimbabwe and led by Zenzeto Ndlovu. So far, the group from Bulawayo has gone whitewater rafting, shopping and attended a football game in Auburn, among other activities. The students will remain in America until Friday.

“It’s been fun to see the communities come together,” Stewart said. “All of the children are staying in different homes, there’s been other people who have made meals for them, their lunches, their dinners.”

The international students, ranging from ages 10 to 15, waited outside of the courts at the Valley Sportsplex on Wednesday for the rain to slow down for most of the afternoon. The energetic bunch laughed, danced and jumped around one another in the meantime, waiting for sunlight. Point sophomore Sofia Villalobos interacted with a lot of the students as time passed as well. One of the students from Zimbabwe entertained the Skyhawks’ men’s team by dabbing for a couple of photos.

“So they do that over there, too,” a Point player commented on the young dancer.

Tennis isn’t a new sport in Zimbabwe, but it’s certainly one of less popular sports in the country. It is Ndlovu’s vision to grow the game in the country and produce more professional players.

“As a country in Africa, we’re economically challenged,” Ndlovu said. “We face a lot of challenges, especially with the resources, equipment and all of that, but we’ve got a lot of kids who have got a lot of potential. We’re thinking and look forward to seeing them progress into pro players.”

Jane Beaty, who’s spent time in Zimbabwe on mission trips, volunteered her services to be the chauffeur for the group in a rented van around the area. Jane’s husband, Stephen Beaty runs free eye clinics every year in Zimbabwe while Jane coaches the players and gives them free equipment. Jane’s ultimate goal is to help create a better life for many of the young players.

“Hopefully, one day, [they can] receive possibly an American scholarship to come over,” Jane Beaty said. “With the economy in Zimbabwe, families are struggling economically. If they work hard, strive hard, continue their skills in tennis, enrich their academics as well their sporting career, they can come here on a tennis scholarship.”