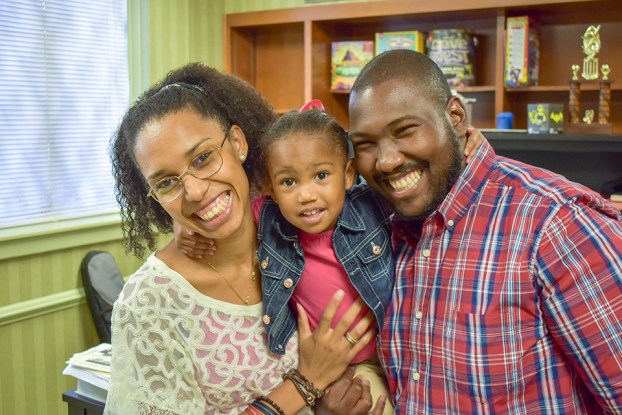 Nelson Furtado, right, has joined West Point’s First United Methodist Church as their new assistant pastor. He is shown above with his wife Michelly, left, and their 2-year-old daughter Sophia, center. --Chris Heaney

Having been in the process of moving and meeting clergy members for the past three weeks, Furtado has already started designing his plans to expand and reinvigorate youth and family ministry.

Originally from Rio De Janeiro, Brazil, Furtado, his wife Michelly and his 2-year-old daughter Sophia first moved to the United States when he transferred to the Candler School of Theology at Emory in Atlanta.

Although he had started seminary schooling in Rio, ministry wasn’t always his goal.

Furtado said that he first pursued a law degree and passed the bar exam before being called to the church.

“It was a real sense of calling,” he said. “I grew up in a church and knew that I was going to work in and serve the church, but the original idea was to work in the church as an attorney, doing pro bonos and things of that nature.”

After completing school in Atlanta, Furtado was appointed to Pleasant Grove United Methodist in LaGrange where he worked for a year before coming in as assistant pastor in West Point’s diocese.

“Rio, it’s a big city just like Atlanta,” he said. “The major change from Rio and Atlanta to LaGrange and West Point is the big city to small city. No traffic, slower pace but much friendlier people and making connections is a lot easier.”

He and his wife Michelly say that they felt welcomed into West Point from the very first time they visited.

Michelly works as a stay-at-home-mom with Sophia right now but was previously a professor of Portuguese and Literature with a specialization in psychopathology.

“It’s been really good,” she said about the move to West Point.

“I feel like in the whole process of moving to the U.S. that God is guiding our path.”

Both having Portuguese as their native language in Brazil, Furtado is fluent in English and said that he learned from his schooling and his work as a tour guide and translator for missionaries in Rio. He feels that his cultural upbringing will help him bring new ways of thinking to West Point.

“Being Latino, being black and working in a predominately white church, I will bring that diversity that will help in those conversations and bring diversity overall to the church and reach those two cultures,” Furtado said.

“We are absolutely excited to have Nelson here with us,” he said.

“I think that he offers us a new kind of ministry and provides us with some new perspectives, some new ways of being the church, and I think he will be instrumental in helping us rebuild, recreate our children and youth ministries to be more in service with our community and the people who are our neighbors.”