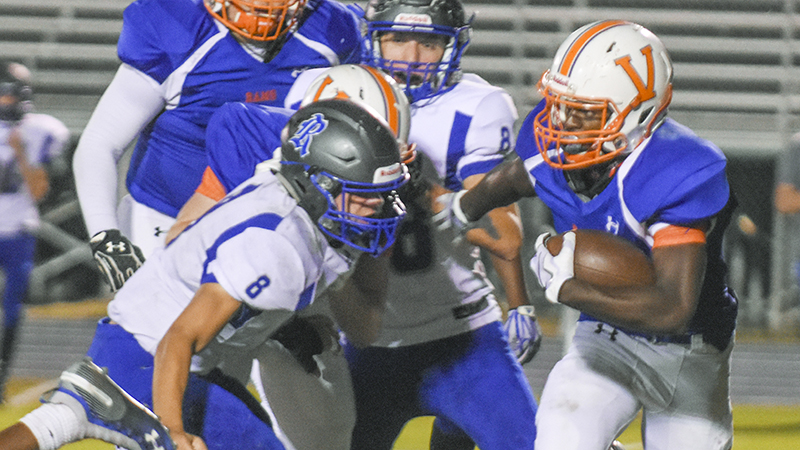 Valley freshman running back B.J. Baker looks for running room in the first half of Friday night’s game against Rehobeth. Baker had a big night, including two first half rushing touchdowns. --Daniel Evans

VALLEY — The Valley Rams enjoyed homecoming night with a 28-2 win over Rehobeth on Friday night.

Valley was led by freshman running back B.J. Baker, who returned to action after missing four games due to suspension. Baker ran for three touchdowns on the night.

“I wasn’t shocked,” Valley head football coach Buster Daniel said after the win. “B.J.’s B.J. We’ve missed him. He was a little rusty, you can tell he missed four games, but he’ll get back in shape quick.”

The Valley offense saw a balanced attack through the air with Eli Culpepper and D.J. Dunn seeing snaps in the shotgun and Randall Brooks joining in on the rushing attack with Baker on the ground.

The Rams’ defense prevented almost any Rehobeth pass from being completed during the night.

Valley made a couple of stops on the goal line and on fourth downs to seal the deal in the final quarter. It was a late-game safety that put Rehobeth on the board, which Daniel accepts the blame for allowing

“We did some good things,” Daniel said.

“We made some mistakes. We had to make some early adjustments. They did some things that we weren’t expecting, we made a couple of adjustments and the kids played well. This is the kind of game that you needed. We’ve got a big game next week, but this was a region game, and we’re proud to win it.”

The win keeps Valley’s playoff chances alive. Going into the matchup, the Rams were on the outside looking in of a three-way tie between Charles Henderson, Beauregard and Carroll in the region for the final playoff spot. Valley plays at Charles Henderson next week.

“We have to do our part,” Daniel said.