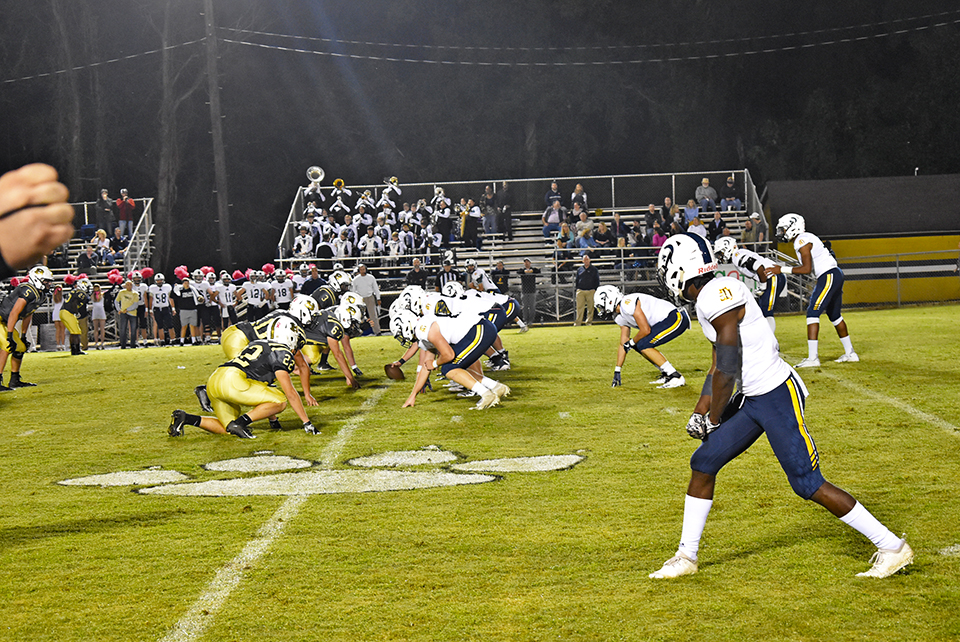 LINE UP: Beulah’s defensive line lines up against St. James during the first half on Friday night. Photo by Rashad Milligan

BEULAH — After a 5-0 start, Beulah has now found itself in a two-game losing streak after dropping a 49-20 contest against 6-1 St. James on Friday night.

“Tonight, we didn’t play well enough to be a good team,” Beulah head football coach Cody Flournoy said. “At times, we showed signs but not as an overall good performance.”

Bobcats junior Chris Person led all Beulah rushers with 85 yards on 13 carries. Senior quarterback Lonzie Portis struggled to net the yardage he’s been getting on the ground so far this season, finishing with 34 yards on 12 attempts. Through the air, Portis completed six-of-11 passes for 56 yards on the night.

The Bobcats don’t have much room to relax before the postseason begins, as Beulah now only has two more regional games scheduled in the season.

“After the game, I told the guys that they had to stick together,” Flournoy said. “We still have a lot to play for and we have to find a way to win next week. We can’t afford to have a flat performance.”

Beulah received a huge boost on Friday night, seeing the return of senior linebacker and running back Caden Dowdell. Dowdell missed multiple games in the middle of the season and was seen wearing a walking boot on the sideline one Friday night.

Dowdell made his presence felt immediately, leading the team with 11 tackles and rushing for all three of Beulah’s touchdowns on the night.

“Caden definitely gave us a spark,” Flournoy said. “He looked fresh and rested. I didn’t see any signs of rust. We’ll need him healthy for the next few games.”

Beulah returns to action next week at Dadeville.