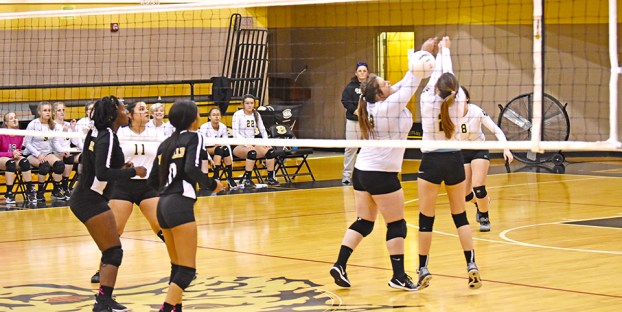 BEULAH — Close but no cigar.

“You can still tell that my ears are red and my face is red,” Beulah head volleyball coach Allison Aikens said immediately following the match. “It did (sting) more so that some of the simple mistakes that we had tonight, we haven’t made in the last couple of games. I’m really disappointed that we didn’t win it for our seniors and for the other girls, but we’re still going to regionals, we still have something to look forward to, we’re still coming to practice tomorrow and work toward Thursday. Our season is not over, we just have a little work ahead of us and go and, hopefully, do well in Montgomery.”

Beulah came out energized by the home crowd on the Bobcats’ court. Some of the top players from the junior varsity volleyball team joined the older group for the start of postseason play. Many of the members of Beulah’s athletic department were in attendance, including the Bobcat cheerleaders, boys head basketball coach Curtis Noble, head baseball coach David Russell and school principal Cincrystal Poythress.

Dadeville’s energy increased after every timeout in the comeback effort. Group claps began in the Tigers’ huddle before going back to the court to compete.

Beulah slowly, but surely, began to show more visible frustration on the court after every missed point.

With all momentum appearing to be on Dadeville’s side during the fifth and final set, the Bobcats didn’t back down and continued to fight in a surge that was led by freshmen K.K. Chambers and Katie Morris.

“K.K. ran across to the bleachers and got that long pass over that kept our rally going,” Aikens said. “They’re the future of our program, so I like what I see. They’re a great team players, and they work hard. I’m just glad they play for Beulah.”

The Bobcats have a quick turnaround with the team’s first game in the regional tournament happening at 9 a.m. in Montgomery at the Multiplex at Cramton Bowl.

If Beulah wins, the team will play again on Thursday at 3:30 p.m.

No. 1 ranked Lanett coasts to 67-0 win over Verbena

LANETT —  It was just another Friday closer to the playoffs for 1A No. 1 Lanett in its matchup against... read more