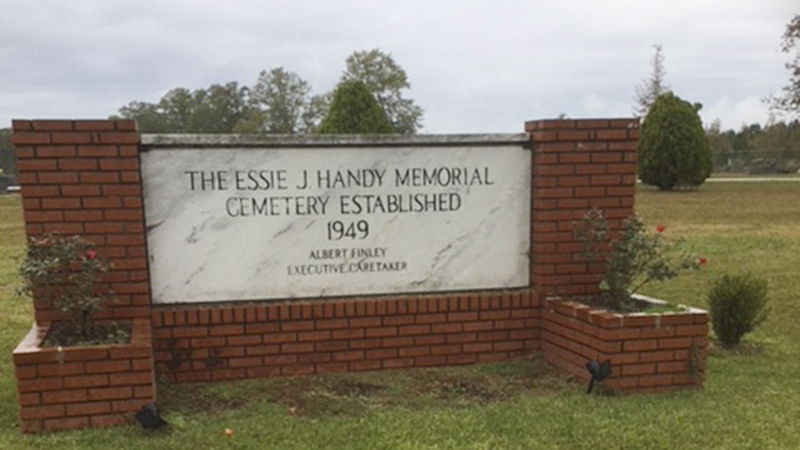 LaFAYETTE — When her son Ralph died of Tuberculosis in 1940, the only place in LaFayette that Essie Jones Handy was able to lay his body to rest was the Gresham Cemetery on 1st Avenue, as they were African Americans in the South during times of segregation.

Ralph Handy was only one of the Handy’s 10 children, though, and they realized after burying him that there was not enough room in Gresham for an ample family plot.

Essie Handy decided to do something about it. After nine years of raising money through community donations, she bought land at what is now 402 B Street SW to start a new cemetery where her family and the families of other African Americans in Chambers County could be buried.

That was in 1949. Almost 70 years later, the Essie J. Handy Memorial Cemetery has been added to the Alabama Historic Cemetery Register as the fifth in the county and 809th in the state.

“It really overwhelmed us when we learned that the cemetery would be recognized in this way,” said Handy’s daughter-in-law Kathy Handy from her home in Garden City, New York. “It’s very uplifting and shows how much people care. It was a moving tribute, a way to bring Essie’s legacy to life.”

Kathy Handy is the secretary-treasurer of the Essie J. Handy Association, a group formed in 2016 by LaFayette citizens wanting to ‘beautify’ the historic area of the city.

“We saw the need for the beautification and personal care that the cemetery needed,” said association executive director Charlotte Blasingame. “I don’t want to cut the city short, though, because they were the ones responsible for keeping it up and running. We were just trying to take some of the work off of the city.”

By working with the city and collecting donations, the association has added shrubbery along the entranceway, brick structures and a stone sign etched with the cemetery’s name.

Because of its importance as a historical landmark and pillar of the city’s history, the association was formed with the intention of getting the cemetery registered by the state. Working with Blasingame, Handy spent the summer of 2018 in Chambers County to get the cemetery on the register.

Handy said that she went from grave to grave recording the names of the deceased for the application. Gathering the names of veterans who had been laid to rest there, she worked with the Alabama Department of Veterans Affairs to get their accolades as well.

“It was a lot of paperwork,” she said.

On Oct. 17, the association received a letter confirming the cemetery’s listing on the historic register. Handy said that the next step for them is purchasing a historical marker detailing the life of Essie J. Handy. They expect the marker to be erected in the coming months.

The importance of Handy’s legacy is something shared between LaFayette citizens. City Council Member Toney Thomas said that he actually knew Handy as a child and that she played a large part in his upbringing.

“[The registry] really touches my heart,” he said. “Miss Essie J Handy actually helped raise me in the community that I grew up in. She was our next door neighbor and she and my mom were good friends.”

They moved to the area and her husband became the principal of Chambers County Training School in 1925. She collected donations in order to purchase five acres of land for the school’s playground.

She holds significance in Chambers County history as well, as, according to Kathy Handy, Essie was the first African American woman in the county to vote, having to recite a majority of the Constitution before being afforded the privilege.

“She was a civil rights activist and did a lot of good for the area,” Thomas said. “She was a very educated woman, she helped anyone that she could and was just a very great woman.”