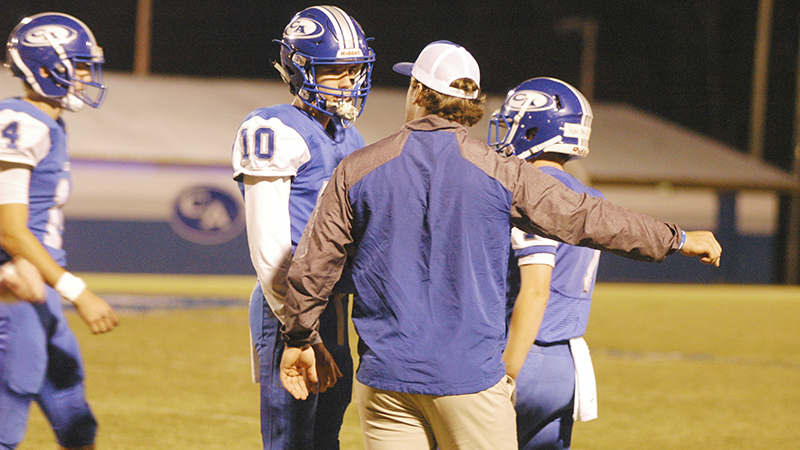 LaFAYETTE — For a third straight year the Chambers Academy Rebels have had an undefeated regular season in football. They went to 10-0 on the current season with a 48-0 drubbing of the Marengo Academy Longhorns Friday at Torbert Field. The Rebels scored touchdowns on their first six possessions to lead 41-0 with 6:17 left in the second quarter. The Chambers’ starters then sat out the rest of the first half, and the backups kept the visitors from getting anything going on offense.

The Rebels scored on their first possession of the second half to make it 48-0 and the reserves played the rest of the game, keeping the Longhorns off the scoreboard to keep a shutout intact.

The Rebels rolled up a total of 322 yards on the ground and 112 in the air. Sophomore quarterback Payton Allen was 3 of 5 passing with TD passes to C.J. Lyons and Caydon Smoot. Lyons ran the ball eight times for 140 yards and two scores, Hayden Harris had five carries for 192 yards and two TDs. Jordan Gillespie had an 18-yard run with a fumble for another score.

“We played like we were supposed to play,” said head coach Jason Allen. “We came out and were hot on offense from the start and played shutdown defense the whole way. It was good for our seniors to go out in style on senior night. This team has been fun to watch this year. The difference between this team and ones we’ve had in recent years is that we give up so little on defense.”

Leading the way on defense in the win over Marengo were linebackers Braxton Allen and Gavin Kite and defensive lineman Dijon Darden, each of whom had five tackles. Nick Harmon had four tackles and a sack; Colton Hand three tackles and an interception.

The Rebels will have a week off before starting the playoffs on Nov. 2. They will likely play either Jackson Academy or Snook Academy.

“We have to change our mindset going into the playoffs,” Coach Allen said. “It’s the time of year you win or go home. We will work on fundamentals next week and the following week get ready for our opponent.”

After holding the Longhorns to a three-and-out on their first possession, the Rebels took over on their 26 following a punt. On back-to-back plays, senior running back Hayden Harris gashed the middle of the Marengo line, advancing the ball to the Longhorn 33. After a couple of lost yardage plays, quarterback Payton Allen found C.J. Lyons open on a screen pass off the left side of the line. The fleet senior sped down the home sideline 41 yards for the first score of the game. Allen’s PAT made it 7-0 Chambers with 8:22 left in the opening period. After holding the visitors to another three-and-out on their next possession, Chambers took the ball on a punt on their 37 and went 63 yards on their second possession, getting points on a long run by Harris down the right sideline. The PAT failed, but with five minutes left in the opening period, the Rebels had jumped ahead 13-0.

The Rebels made it 21-0 on their third possession, going 72 yards and scoring on a 55-yard run by Lyons. Jordan Gillespie added two points on the conversion, scoring off the left side of the line. The defense got into the scoring act on Marengo’s next possession when Jordan Gillespie scooped up a fumble and ran it back 19 yards for a TD. On the play, Marengo’s quarterback, Hayden Campbell, coughed up the ball after being hit by a host of Chambers defenders on a run off left tackle.

A missed PAT kept the score at 27-0 with 59.5 seconds left in the first quarter.

Chambers’ next score came through the passing game. In one of the prettiest plays of the night, Payton Allen rolled right and hit wideout Caydon Smoot on a 51-yard bomb. The pass was right on the money, Smoot gathered it in inside the 20 and easily reached the south end zone to make it 33-0. Hayden Harris ran it in off the right side of the line on the conversion to make it 35-0 with 10:04 left in the second quarter.

A long punt return by Gillespie had the Rebels in great field position on their next possession. A nine-yard run up the middle by Hayden Harris put the Rebels on the board once again midway of the second period. That made it 41-0 at the 6:17 mark of the period. The visitors attempted an onside kick to start the second half. It failed, giving Chambers great field position at the Longhorn 47. They quickly took it the distance, with Gillespie getting what would turn out to be the final score of the game on a 14-yard run around left end. Payton Allen’s PAT was good this time, making the score 48-0 with 8:48 left in the third quarter.

With the game out of hand at the half, the game was shortened by running the clock continuously in the final two periods.