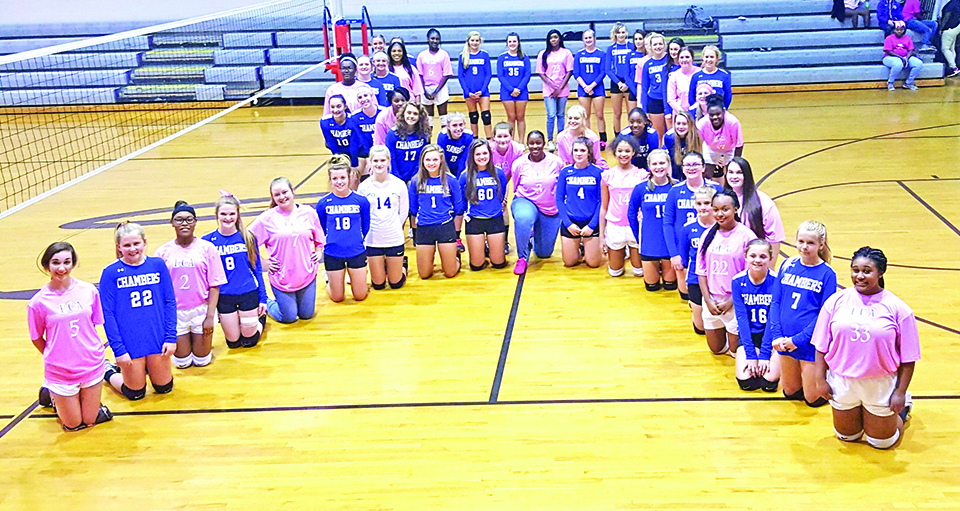 ON MONDAYS THEY WEAR PINK: Evangel celebrated its “pink out” match against Chambers Academy on Monday afternoon. Photo submitted

In head coach Jaylan Reynolds’ first season at the helm, Chambers Academy’s volleyball team is in the thick of hosting a playoff game. The varsity team’s region record went to 5-1 after a victory over Evangel Christian Academy on Monday night.

The varsity Rebels won in four sets over the Lions, 25-16, 25-15, 15-25, 25-16. Claire Allen led Chambers with 10 assists and four aces. Chloe Mitcham had four aces and one assist. Bailey Allen had seven kills and two assists. Megan Ware had three kills, five assists and two aces. Britten Stephens had five kills and an ace in the victory.

Chambers Academy has two home regional games remaining this season against East Memorial Christian Academy on Oct. 16 and Cornerstone on Oct. 18. Splitting those two matchups should put the Rebels in position to have a No. 2 seed heading into the playoffs.

The junior varsity squad is undefeated in region play this season and has only lost one game all season in the opener against Edgewood. The JV Rebels are expected to be contenders in next week’s JV state championship.

The JV Rebels won on Monday afternoon against Evangel Christian Academy in two sets, 25-17 and 25-9. Allen led the team while playing double duty, with three kills, one assist and one ace. Natalie Lovelace had eight aces and one assist. Lexi Smith contributed three kills in the victory.