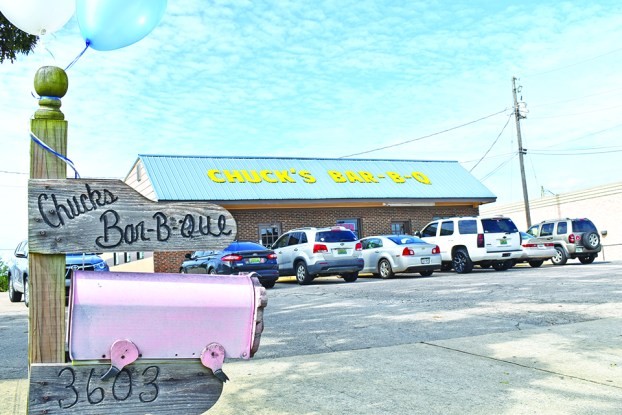 VALLEY — Anyone who has lived, worked or driven through Valley has most likely caught a whiff of pork being cooked over a wood fire. That smell comes from Chuck’s Bar-B-Q who, on Monday, celebrated their 40th year of serving up food to the Greater Valley Area.

Chuck’s was purchased in 1978 by Sheryl and Karen Stone after Sheryl met the then-owner during his bread delivery route.

“My husband was working for Sunbeam, he was the bread man,” Karen said. “He came in [to Chuck’s] one morning and was fussing about the bread route, and the owner was fussing about the BBQ place so [Sheryl] asked him how much he would take for it. The guy named a figure and Sheryl came home and said ‘I’ve found what I want to do.”

Having been married only two years, the Stones took over Chuck’s the very day that Karen graduated from Auburn University with a BS in education.

“When we first had it, it was the two of us and we had one employee who worked for three hours a day at lunch,” Karen Stone said. “We have been very fortunate. It’s been good to me. I was able to go to graduate school and I taught at Southern Union for 20 years.”

Karen and Sheryl ran the business together until Sheryl tragically passed away in 2003. To keep the business going strong, though, their niece Terri Stone Bass stepped in at the time of his passing and has been operating the restaurant ever since.

“She had worked here since she was old enough to stand up on a Coca-Cola crate and play with the cash register,” Karen Stone said. “She loved the BBQ place. She stepped in, took over and has been in charge since 2003 and has done a great job.”

Terri, with the help of several loyal employees who have some worked at Chuck’s for over 20 years, keep the meat smoking and the customers coming back.

“It means the world to me,” Bass said. “Everybody knew Sheryl and this was his passion, food. I just fell into loving it just like he did. He always told me ‘I want to teach you everything I know, in case something happens, so you can take care of Chuck’s.”

Taking care of it is exactly what Bass has done, as they have been a part of the local Chamber of Commerce and community since their start.

“Anytime a business can sustain itself through the ups and downs of an economy like we’ve had… it really speaks volumes to the support that the community shows to them,” said Greater Valley Area Chamber of Commerce Executive Director Ashley Crane. “We are just glad to have Chuck’s Bar-B-Q here and wish them 40 more years of happiness.”