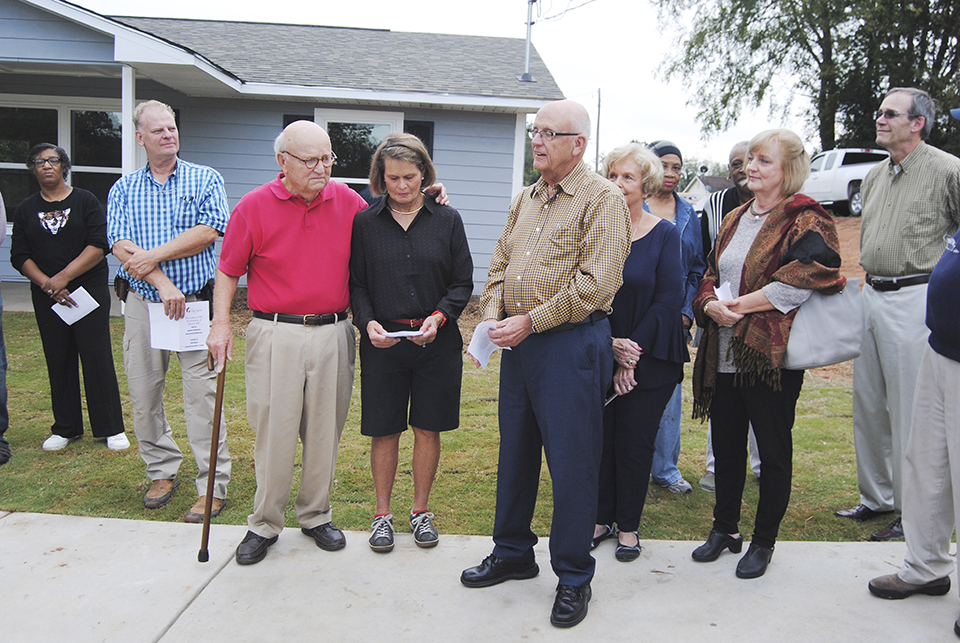 VALLEY — Three years ago the Chattahoochee Fuller Center Project’s board of directors set a goal of building ten new houses by the year 2019. It looked to be an ambitious goal to accomplish. As it would turn out, the CFCP wouldn’t do it in four years. They did it in three.

CFCP President Curt Johnson said that four houses built this year and ten over the past three years are good numbers but felt the community can do more in the future.

“It’s great for a community with 24,000 people,” he said. “but we must guard against complacency. Millard Fuller had a sense of urgency that you should be doing something all the time. He was an enemy of complacency. He thought you could always do better. He felt that as long as you understand that complacency is you enemy you will do okay.”

CFCP Executive Director Kim Roberts said that 2018 had been a very productive year for the organization, not just with the four new homes but also a Kia employee project in downtown West Point, Point University’s Impact Day and a week of work on behalf of students from Cleveland State University in Ohio. She lauded the work done by House Captain Doug Dewberry and members of the First Baptist Church of Valley at No. 41 and by House Captain Steve Tramell, employees of Nobord and New Birth Ministry at No. 42 in West Point.

Roberts became emotional when she recalled how Bill and Martha Scott had urged her to come and be a difference-maker for the CFCP.

Dewberry said that members of the First Baptist Church of Valley had taken mission trips to build in places like Mexico and Haiti but that there was something special about building close to home.

“A total of 34 members of the church helped out in some way in the building we did here,” he said.

Roberts thanked Pastor Weymon Johnson and the young men from New Birth Ministry. “I love those guys,” Roberts said. “They work so hard, and they are so dependable. They helped us stand the walls and worked on the roof.”

Pastor Shandor Calloway of New Hope Missionary Baptist Church, Lanett, presented Tiffany Roberts the keys to her new home and said the dedicatory prayer. It was a very special event for him – he’s Tiffany’s step-father. His daughter wept happy tears as she thanked the volunteers for their hard work in building the home.

“You have blessed me and my son,” she said. “I know God will bless you for what you did. It was God working through all of you to get this done.”

“There are more people out there who need us,” Kim Roberts said. “This is God’s work, and it will continue as long as we have donations and volunteers. Continue to pray for us. We love you all. God bless you.”

In the 5 p.m. ceremony in West Point, Charlie Maxwell was thanked for donating the land for the CFCP No. 42 build, and the Glover family was recognized for their donation to the project. The house was built in memory of the late Cliff Glover, who died last year at age 104.

“He came to West Point a long time ago,” said son Edmund Glover. “The house he built in 1937 he was still living in when he died a year ago. I know he would be honored by this. We are.”

“We are so happy the Dardys will be the homeowners,” Bill Scott said. “Millard Fuller put an economic model in place. Every dollar you give builds a house, comes back and builds another house. These new homes have stabilized the lives of 40 local families. Some children who were raised in these homes have graduated from college and are doing well. Millard Fuller was right when he said that homes are foundational in people’s lives.”

Scott said it was meaningful to him for the new home to honor Cliff Glover.

“He and Henderson Huguley gave me my first job after I’d graduated college and came back home to West Point,” he said. “He was one of the finest people I’ve ever known. He built houses, the community and leaders.”

Edmund Glover said his dad worked on the Habitat for Humanity houses when they were being built in West Point in the 1990s. He added that the houses being built now by the CFCP are improved a lot over those first homes that went up.

“I have no doubt they will still be here 20 years from now,” he said.

Glover thanked Tramell on the job he did as house captain.

“There were times he had to do five different things for five different groups of people who didn’t know what they were doing,” he said. “If we had more houses like this in West Point, our community would be much better off.”

“I’m very proud of the way my dad led his life and his philosophy,” Glover said. “His philosophy was very simple – always do the right thing. I am so happy this home was built in his memory, and I know he would be proud of it, too.”

Nelson Furtado, assistant pastor of West Point Methodist, presented the Dardys the keys to their new home and offered the closing prayer.

She said that her theme for the two builds is Hebrews 6:10 – “God is not unjust; He will not forget your work and the love you have shown Him as yourhave helped his people and continue to help them.”