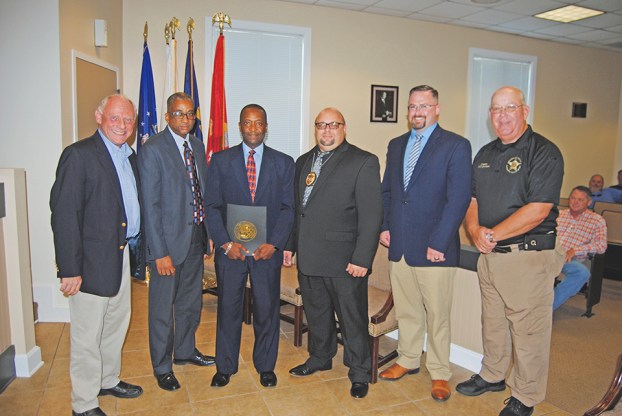 LANETT — The Lanett City Council has formally commended a local law enforcement officer whose rapid response to a July 24th bank robbery prevented the suspects from making a clean getaway. Capt. Robert Chambers of the Chambers County Drug Task Force is credited with stopping the getaway car and holding the suspects at bay until more help could arrive.

The attempted bank robbery took place during the noon hour on July 24th at the Farmers and Merchants Bank in Huguley. “Witnesses stated that two black males wearing dark shirts, gloves and something covering their faces exited the bank, ran behind the nearby Chicken Stop and were seen getting into a red Ford Mustang and and heading south along Cusseta Road at a high rate of speed,” the commendation reads. “At 12:44 p.m. (Capt. Chambers) notified all units that he had located the vehicle on County Road 83 and was initiating a traffic stop of the vehicle. Capt. Chambers held the suspects at this location while awaiting supporting units from Valley Police Department, the Chambers County Sheriff’s Office and the Lanett Police Department. All three occupants of the vehicle were arrested on charges of robbery, first degree.”

Chambers was commended for his attentiveness and quick response that led to an immediate apprehension of three men who have been charged with armed bank robbery. All of the stolen currency was recovered.

“Had he not acted as quickly as he did,” said Mayor Kyle McCoy, “this incident could have resulted in a tragedy.”

In other action on Monday Council Member Tony Malone said that the city had received some really good applications for police officers. He said that he and other members of the police committee would be reviewing them very soon.

The council approved a resolution authorizing Alabama Power to install or replace some street lights in the West Shawmut section of town. The city will be paying the monthly cost of the lights.

Another resolution that was approved authorizes Fire & EMS Chief Johnny Allen to sign a memorandum of understanding to lease space on a nearby communications tower. The city will be paying the local 9-1-1 board, which in turn will pay the Harris County tower owner. “There will be a slight increase involved,” said Chief Allen. “It will amount to around $12 a month. The Fire/EMS Department and the police department both use this tower.”

Story and Bridges to represent Lanett in All-Star Game

LANETT — The 1A No. 1 Lanett Panthers will have two representatives in the 32nd annual Alabama-Mississippi Classic on Dec.... read more