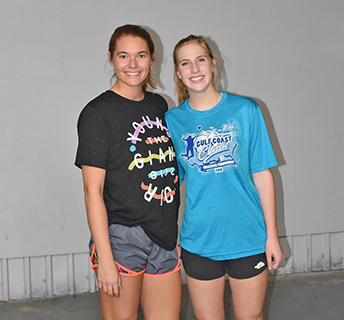 LaFAYETTE —Bailey Allen is the star that the Chambers Academy volleyball program has leaned on this year.

The 14-year-old freshman is routinely at the top of the stat sheet leading the team in kills after each contest.

“Bailey has been absolutely phenomenal,” Chambers Academy head volleyball coach Jaylan Reynolds said. “She has blown me away, I forget that she’s a ninth grader. I keep thinking, ‘oh man, I’m going to lose her in the next year or two.’ Then I have to remind myself that she’s only 14 and already at this level. It just makes me super excited for [today] and the future.”

Today, the Rebels are taking the hour-long trip down to Montgomery to play in the AISA Final Four in the Multiplex at Cramton Bowl. Chambers Academy plays Eastwood at 12 p.m. CT. and if the team wins they will face the winner of Southern vs. Patrician for the state championship.

A week and a half ago, Allen led the Rebels’ junior varsity squad to a state championship. In the tournament’s three games, she had a combined 25 kills, and was given MVP honors.

This season, Chambers Academy is led by the first-year head coach Reynolds, who has proven to be a breath of fresh air for the program in the win column.

Reynolds, 24, often inserts herself into the team’s practices and challenges the Rebels at the net with her 5-foot-10-inch frame.

The practices have been intense, but the head coach never passed on the opportunity to reward her players.

After each victory, she’s handed out ribbons to players.

Just two days before the team began to play in the Final Four, Reynolds allotted the players 20 minutes of karaoke, where Allen and a handful of other teammates had the opportunity to sing their hearts out to Taylor Swift’s “Our Song” after ending practice early.

Allen comes from a competitive household herself. Her older brother is junior Braxton Allen, a linebacker who has led AISA No. 3-ranked Chambers to its fewest points allowed in school history this season.

“We go back-and-forth,” Bailey Allen said. “We’re both competitive, but we’re both like a team, and we like motivating each other to do better. We like to compete with each other, but it’s good.”

The 5-foot-9-inch freshman admits that she’s probably her toughest critic, but she has accepted the responsibility of already leading the program.

“It’s really stressful sometimes, it can be a lot of pressure on you,” she said. “But seeing all of the success, it really feels good to help lead the team, and help this program develop. It’s been really good.”

In addition to playing volleyball in the fall, Allen cheers on her brother and other family members on Friday nights when the football team takes the field.

After graduating only one senior this year, today can be just the start of a very successful Rebel volleyball run.

“I feel like all we can do is go up from here,” she said. “I think we’re doing well. Our program’s grown a lot, and I feel like we’re here. I feel like we can stay here. I hope we keep the attention on us, and I hope that we keep impressing everybody.”

The more things change, the more things stay the same. Lanett and Chambers Academy have kept their  positions in the... read more