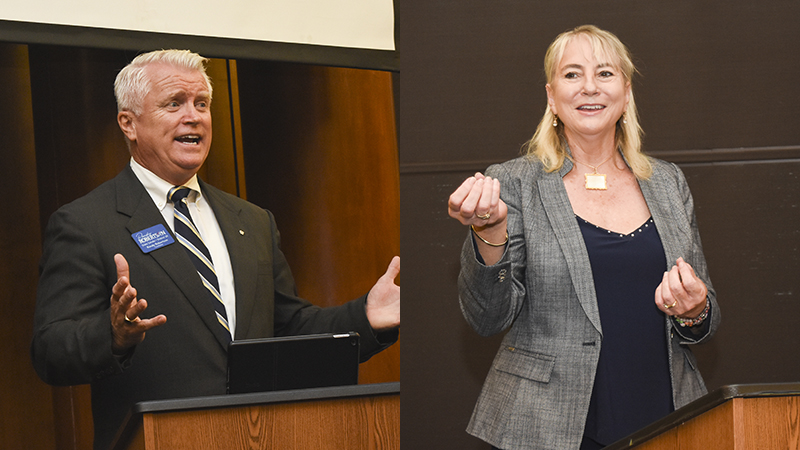 LaGRANGE — Valerie Haskins and Randy Robertson, the two candidates for Senate District 29, participated in a debate Tuesday morning at LaGrange College. The candidates discussed their stance on medical marijuana, healthcare, gun control and other issues. All of the questions were asked by the audience, which was largely filled with LaGrange College students.

Most of the debate was fairly subdued, but a question on healthcare went back and forth for several minutes and was the most fiercely discussed topic.

“Let’s understand the state government nor the federal government is a business,” Robertson said. “We don’t create anything, sell anything, make any money. Every bit of money the federal government has and the state government has is your money and your parents’ money. Medicaid is a fragile system that was established for those disabled, the elderly and the weakest in our community. If we expand healthcare, then everyone in this room would qualify. We would overburden an already fragile system.”

Robertson argued that everyone in the room would qualify for Medicaid, likely because most college students aren’t working a high-paying job yet. The federal government originally fully funded Medicaid expansion, but will pay 90 percent of the costs starting in 2020, with states picking up the other 10 percent.

The candidates also discussed medical marijuana, a hot button issue in Georgia. Currently it is legal for patients with a low THC Oil registry cards to possess up to 24 fluid ounces of low THC oil, but it’s illegal to purchase it anywhere in the state.

“The state of Georgia has legalized the use of medical marijuana, but they haven’t made it possible for these people who need it to achieve getting it here in Georgia,” Haskins said. “That’s something I want to be very clear about. I want to make sure there are pharmacies here, they cultivate it here, they get it to the pharmacies and they get it to the people who need it.”

Robertson said the state legislature looked into it, “researched it” and found middle ground.

“There’s still some to be worked out on that, but the problem we have is the same problem they had in Montana when they legalized marijuana and then had to go back and make it illegal again,” Robertson said. “While we are bringing these children up here with legitimate conditions that need to be addressed, we have all these adults piling in there wanting things for themselves.”

Both candidates said they are supporters of the second amendment.

“I am for supporting common sense gun laws,” Haskins said. “…One thing I would like to propose is people who are convicted of domestic violence will not have access to these guns.”

Robertson pointed out that it is already illegal to possess a gun if you are convicted of domestic violence.

“The problem that we have that we’ve realized is that we always look at the gun but never look at the individual behind the gun in some of the instances that have occurred,” Robertson said. “Mental health issues and illnesses are a huge problem that encompasses not only the pressures of society that are hitting these individuals but also how the medical community handles that.”

“We need to decriminalize small amounts of marijuana. Police officers, law enforcement are spending too much time having to do with that. Their time is valuable,” Haskins said. “Also, cash bail. People do not need to be put in jail for being poor. My solution to that part of the mass incarceration is to make sure people have insurance and when they leave jail, make sure they have insurance. We also need more programs in the rural area for opioid and drug addiction.”

The general election is Nov. 6.