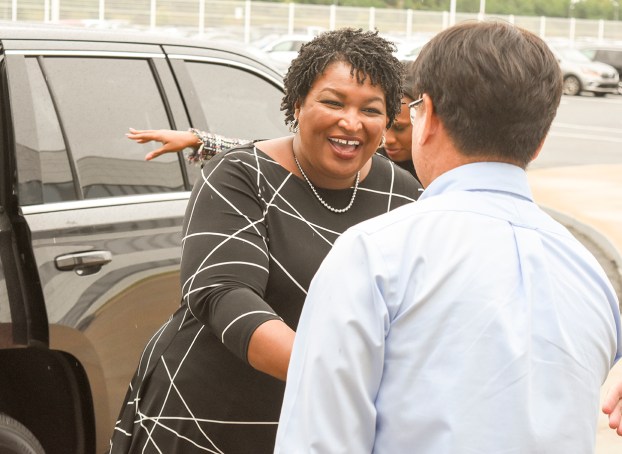 Stacey Abrams, the Democratic candidate for governor, smiles as she is introduced to members of the Kia Motors Manufacturing Georgia administration team. --Daniel Evans

On Thursday, Abrams had a chance to meet with Kia’s administration team, including Jason Shin, KMMG’s President and CEO, and Stuart Countess, KMMG’s chief administrative officer. She was given a brief tour of the manufacturing center and had a brief interview session with the media afterward.

During Kia’s presentation, Abrams specifically asked how tariffs are affecting the business.

“What has been the impact of the trade wars on your production and also your supply chain?” Abrams asked Countess.

Countess said he was unsure of the total impact, but he did note that 15 to 16 percent of vehicles produced are exported to Canada or Mexico.

“I will say our team members are well-aware also of what’s going on,” Countess said, referencing the 2,700 employees at KMMG and participation in the “Don’t Tax My Ride” initiative earlier this year.

During the media session, Abrams was asked what she would do to help Georgia’s business climate if elected governor.

“I think the fundamental [element] is making sure we have the skilled workforce we need,” Abrams said. “That’s why I’m proposing 22,000 registered apprenticeships in Georgia by 2022. South Carolina already has 17,000 and Georgia has more than 8,000. Given South Carolina is half our size, that makes no sense.”

Abrams also said there needs to be deeper investment in infrastructure and workforce readiness needs to begin earlier. She also said that the business climate would be helped with targeted tax incentives that attract industries.

“The reason Kia was so successful is it also created an atmosphere for a supply chain,” Abrams said. “It wasn’t just about Kia. It was all the companies that would be providing new jobs and materials to make this plant make sense, and we wanted to be able to do that. We’ve been able to do this with Kia and we’ve also been able to do this with the film industry. I want us to do it with advanced energy and think about other communities where manufacturing can sit side-by-side with the other pieces that can help create jobs and create economic opportunity.”

She was also asked about the minimum wage, which she believes is too low.

Abrams said she is proposing a childcare tax credit, which would allow families not to have to spend more than 7 to 10 percent of their wages on child care.

Abrams is expected to return to Troup County on Oct. 30 at Lafayette Square.