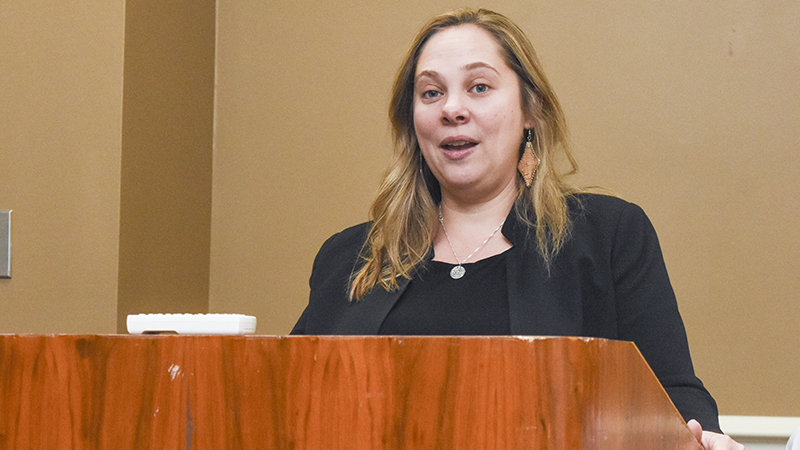 Amico challenged the students to get out and vote.

“I don’t believe the enemy of democracy is another political party, I certainly don’t think it is another candidate,” said Amico, who owns a trucking company that employs thousands of truckers and mechanics. “The opponent I’m challenging in this election is apathy… My kids will inherit the world you vote for, they will inherit the leaders you elect, and whether or not you cast your ballot this year if you are an eligible voter, you are voting. You are either voting for the status quo, and the status quo in Georgia has a lot of challenges… so if you don’t vote that’s what you’re voting for.”

Amico talked about the lack of high-speed internet in rural areas, the fact that many Georgians don’t have access to a pediatrician and underfunded public schools. She said expanding Medicaid would put an insurance card in the pockets of 473,000 Georgians that currently don’t have insurance.

“It creates 56,000 jobs, it brings back $3 billion a year of tax money that we pay the federal government back to Georgia, it helps sure up our rural hospitals … and it creates 6.5 million in economic impact,” Amico said of expanding Medicaid. “That won’t solve everything, but it’s a good place to start.”

Laws said she decided to run for her office after seeing how insurance rate increases were affecting Georgia families.

“I could no longer sit on the sidelines and do nothing. I just watched every six months, rate increase after rate increase on car insurance and Georgia is No. 1 in the country in automobile rate hikes,” Laws said.

Laws said insurance companies have not been fairly regulated in Georgia.

“That’s where I come in. As your next insurance commissioner, I will rip up that blank check, literally. Any rate increase they want will have to be justifiable,” Laws said. “As far as I’m concerned, they’ve got enough over the 10 years to keep them for another 10. They’ll be lucky getting any rate increases out of me.”

Dr. John Tures, who set up the speaking event at the college, said that other candidates have also been invited to take part in similar events.