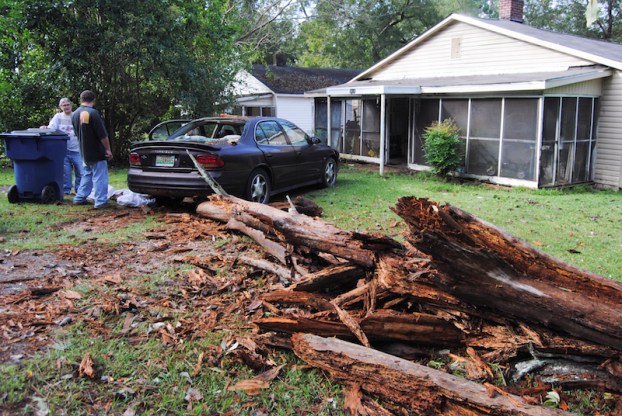 CAR HIT BY TREE — Lanett resident Donald Wade (on the left) suffered a setback when winds from Hurricane Michael blew part of a dead pine tree into his car, which was parked in the front yard. The back window was shattered and the roof of the car crushed. Wade, who has had open heart surgery and has a pacemaker, is on disability. “I have to have a car,” he said, noting that his doctor appointments are in Columbus. - Wayne Clark

Hurricane Michael caused extensive damage to northwest Florida when it landed on Wednesday and caused more damage when it turned and went across Georgia during the night. The turn across Georgia was not a good thing for the Peach State, but it did spare the Valley area from significant damage. Two previous hurricanes that made landfall in northwest Florida – Eloise in 1975 and Opal in 1995 – kept on a northerly path, having the Chattahoochee Valley in its crosshairs.

A glancing blow from Micheal did bring down some trees and large limbs and caused some localized power outages but was nothing like Eloise or Opal, where some people did not have their power restored for days afterward.

In perhaps Michael’s most damaging incident, high winds brought down a large, hollowed out oak tree onto the home of Mr. and Mrs. Pete O’Neal on East 8th Street in West Point. There were three people in the house at the time, but thankfully no one was hurt.

Such was not the case in June 2016 when a large oak crashed through the roof of the house next door, killing an infant.

That’s the kind of tragedy families never get over.

“It came down around midnight,” Mr. O’Neal said. “We had just left the living room for the bedroom in the back of the house.”

Mayor Steve Tramell said West Point had some power outages due to the storm but that they were taken care of fairly quickly. “(Utilities Superintendent) Sammy Inman and his crew did a phenomenal job. They were out there in the midst of the storm getting the power restored.” he said.

Lanett had a power outage near Kroger that was quickly restored. Near midnight, a large pine tree fell across North 16th Street near the intersection of North 10th Avenue. Men from the city’s Streets and Electrical Departments went there during a steady rain to saw up the big tree and to move it off the street with a front end loader.

“These men do great work on behalf of our citizens,” said Lanett Fire & EMS Chief Johnny Allen while watching them cut up and remove the big pine. “Just like firefighters, paramedics and police officers, they are first responders. They are ready 24/7 to handle any kind of emergency.”

Power was off throughout the night for four homes at the end of Morgan Cantey Drive after a large tree fell on a power line, causing a power pole with two transformers to teeter over the road at a 45-degree angle.

The Electrical Department got power flowing again Thursday morning after replacing the damaged pole with a new one and relocating the transformers to the new pole.

North 6th Avenue resident Donald Wade was the recipient of some really bad luck when part of a large dead pine tree near the street broke off and hit his car, smashing the back window and caving in the roof of the car.

“I don’t know what I’m going to do,” he said. “I have to have a car. I’ve had open heart surgery and am on disability. I have a pacemaker and my doctors are in Columbus. I have to drive there for my medical appointments.”

Mayor Leonard Riley said Valley escaped major damage. “In terms of power outages we were very fortunate,” he said. “To my knowledge, we had one tree down on 55th Street, and it was quickly removed. This morning we sent out crews from the Public Works Department to pick up limbs and debris.”

Some local hotels were at full capacity Wednesday night, partly due to northwest Florida residents evacuating their homes but mostly due to Alabama Power crews spending the night there before a full day on Thursday.

“They left at 7 a.m. this morning heading toward Eufaula and Dothan,” said Lacee Ganus, front desk clerk at the Hampon Inn & Suites in Lanett. “They will be back here tonight. We had some people here from Florida who called back home and found out that there homes were okay. They were really relieved to hear that.”

Mike Patel, manager of the Quality Inn in Valley, said the 80 percent of their rooms are booked up for the Alabama Power guys.

Local hotels are in a very busy period right now. They have guests who are there right now because of the storm. They will have plenty of people there this weekend due to an Auburn home football game and next week due to the Senior Masters Games taking place at Valley Community Center.