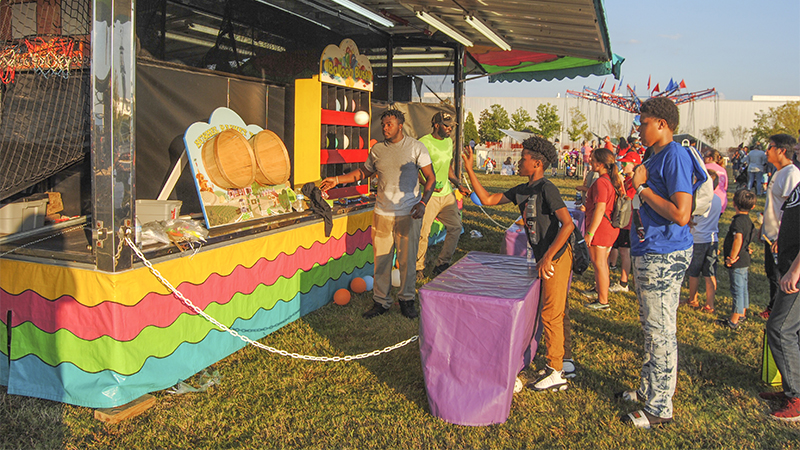 Kia team members and their families enjoyed Team Member Appreciation Day this past Saturday afternoon on the grounds of the KMMG complex in West Point. There was a tailgate zone, lots of food vendors. fun rides for people of all ages. NBA Legends basketball and some amazing bike tricks performed on a BMX course. --Wayne Clark

WEST POINT — When they are at the Kia plant, Kia Motors Manufacturing Georgia team members are completely focused on their work every day of the year but one. That one day is Team Member Appreciation Day, and it took place this past Saturday. Several thousand people were in attendance, and it was hard to find an available parking space in front of the sprawling KMMG complex. It was a day for fun; plenty of KMMG team members and their families had loads of it on the big open space behind the assembly center.

There was something for everybody. Kia of LaGrange had lots of new vehicles on display, and there was something special inside the visitor center: a new Telluride, the new, larger SUV that’s now being manufactured at KMMG.

In remarks from the outdoor stage, president and CEO of Kia Motors North America Headquarters Byung Kwon Rhim said that he hoped the Telluride would become the No. 1 vehicle in the industry.

Spectators could watch basketball and monster BMX competitions. People could take self-guided walking tours of the plant, and in the big area out back could experience the thrill of carnival rides. There was lots of screaming at the Round-Up, which is billed as the world’s Most Xciting Ride. People of all ages had fun coming down a giant Fun Slide and the more adventuresome ones could ride a zip line.

There were lots of large tents where people could get out of the sun, sit for a bit in the cool shade and enjoy some wonderful food. Local people were no doubt happy to get some Newt’s fried chicken.

KMMG Chief Administrative Officer Stuart Countess thanked Kia team members and their families for turning out in such big numbers. “We are so glad to have Mr. Rhim here today,” he said. “We hope everyone gets to see the new Telluride in the show room. We are making it right here at KMMG for the North American market and to export it to the world. Thank you for being here today. We appreciate everyone who works for the Kia family.”

Countess was a good enough sport to participate in the pie-in-the-face booth. Anyone could throw a pie at him.

There was a casino and bingo for those who like to test their luck at games of chance.

There was music throughout the afternoon and a dance contest down by the stage.

There were performances by the GLOW Band and Korean K-Pop.

There were prizes and giveaways throughout the afternoon. Any team member who missed the event missed out on a lot of fun.

Some of the most fun from the day came when team members came across friends and co-workers they hadn’t seen in a while.

The fun day concluded with a giant fireworks display at 8:15 p.m.