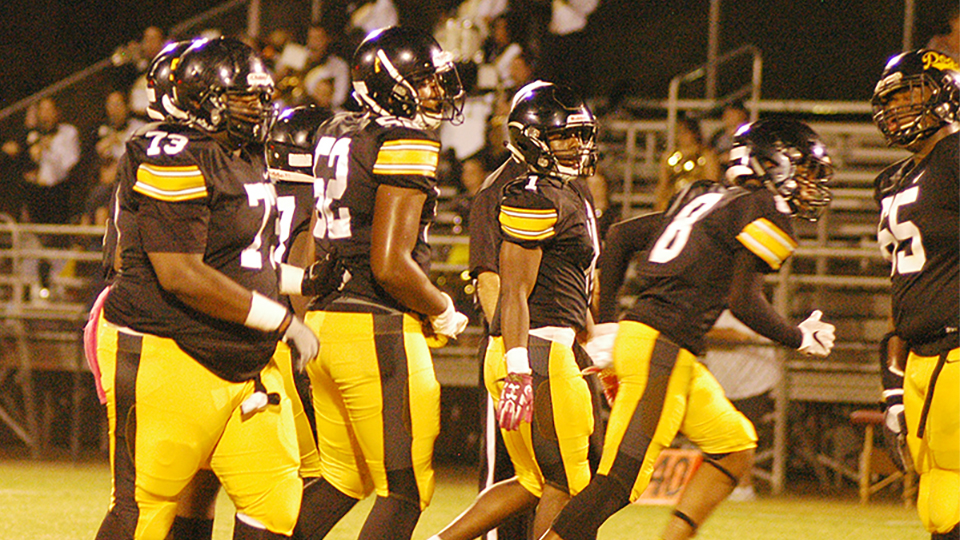 LaFAYETTE — Senior quarterback Jaelin McCurdy ran for three scores and connected on a long scoring pass with Keandrae Peterson to lead the LaFayette Bulldogs to a dominating 41-7 win over the Fayetteville Wolves at Bulldog Stadium. The win evens the team’s record at 3-3 on the year and gives them some momentum heading into the closing stretch with games versus Alabama Christian, Coosa Central and Horseshoe Bend. The Bulldogs are 2-2 in 2A Region 4 with Region games left with Coosa and Horseshoe Bend.

The one negative to the game is that LaFayette hurt themselves with a rash of penalties. That’s the only factor that kept the score as close as it was against a clearly outmanned foe.

After forcing a punt on the visitors’ first possession, LaFayette got the ball in good field position and drove for the first score of the game. A nice run by Peterson gave them a first down on the Fayetteville 18 and on the next play McCurdy circled left end and raced down the sideline for the game’s first score.

Markevious Tolbert booted through the extra point, and with 5:07 showing in the opening period LaFayette led 7-0.

A good defensive stand highlighted by the play of Zachaeus Turner and JaQuavian Boston-Gaines stopped the Wolves cold on their next series and after a poor punt, the Bulldogs put the ball in play on the Fayetteville 43. It took them just one play to score.

McCurdy took a deep drop and fired a beautiful pass to Peterson, who was running a go route to the west end zone. Peterson beat two defenders on the play and gathered the ball in about five yards deep in the end zone. The PAT was wide left, and at the 3:01 mark of the opening quarter, LaFayette had extended its lead to 13-0.

The lead went to 20-0 in the second quarter when McCurdy capped off a scoring drive with a run up the middle from five yards out. Tolbert’s PAT put LaFayette ahead by three scores with 4:26 left in the half.

There was no more scoring in the first half, but LaFayette extended their advantage in the third quarter. A terrific kickoff return by Jordan Wallace had the Bulldogs in great shape at the Fayetteville 39. The Bulldogs hurt themselves with some major distance penalties on the drive, but they overcame that and got points on a four-yard run off the left side of the line by Boston-Gaines on a fourth down play. Tolbert’s third successful PAT made the score 27-o in favor of LaFayette with 8:32 left in the third quarter.

The Bulldogs made it 33-0 on their next possession. McCurdy completed a 64-yard drive with a 47-yard run through the right side of the line.

McCurdy showed great determination on the play, breaking tackles and running over people to find a lane to the end zone.

After holding Fayetteville on their next possession, LaFayette forced a punt and pulled off one of the most exciting plays of the game when Jordan Walker ran it back 70 yards for an apparent score. There was a flag on the play, negating a beautiful return. Not only that, the ball was marked back on the 15. After an unforced fumble on the next play, the Bulldogs were back to their own one. Instead of having another score, LaFayette was as deep on their end of the field as they could be.

They eventually had to punt from that bad field position and Fayetteville, to their credit, made the most of it to get their only score of the game.

The Bulldogs responded by closing out the game with one more touchdown, this one on a short run by Victor Tolbert. McCurdy had his fifth scoring play of the game when he ran in the two-point conversion to make it 41-7 with 2:57 left in the game.

McCurdy had a most productive night with three touchdown runs, a long touchdown pass and a two-point conversion run.

After four straight games on the road, LaFayette was back home for the first time since the Lanett game on Aug. 31. They will not close out the regular season with three straight home games where they should be decisive favorites. This coming Friday will be homecoming.