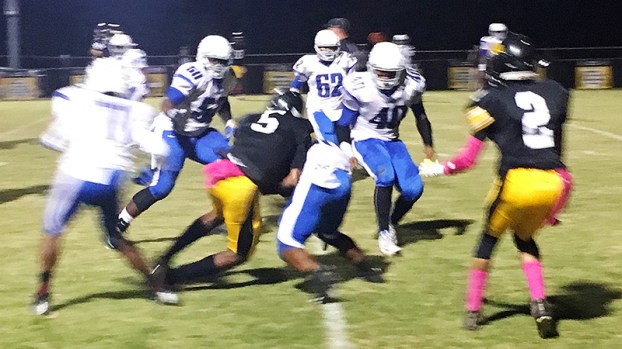 LaFayette wins fourth in a row

LaFAYETTE — LaFayette’s defense shined at home on Friday night in their second shutout of the year, this time against winless Central of Coosa County.

The 44-0 win extends the Bulldogs winning streak to four in a row and an overall record to 5-3.

On the Cougars’ first offensive drive of the game facing a six-point deficit, they rode a crafty running attack deep into Bulldog territory. Coosa decided to try its hand at putting the ball into the air for a shot at the end zone. To put it mildly, Lafayette senior safety Jordan Walker disagreed with that idea.

Walker tracked down the ball until he was able to get a hand on it, but it was ever so slightly out of his reach. He still managed to tip it up though. Without breaking concentration, he corralled the errant ball into his grasp while falling to the ground, effectively putting an end to Coosa’s best drive of the night. This was his first of two picks in the game.

“This is the first year we’ve played zone,” head coach James Lucas said. “Last three years we’ve been playing man and so this year guys have to play both ways. That was another new wrinkle that at the beginning they were just learning. Now, they got it down pat. They’re ball hawks now.”

The boys in black and gold gave the Coosa offense fits for the entire duration of the game. All the offense that the Cougars could muster came from their quarterback scrambling for yards after a play inevitably broke down.

The fourth quarter ended up having a six-minute running clock as a mercy.

“The defense is only giving 53 points in the region,” Lucas said. “That’s the best I’ve seen since I been here. Defense wins championships.”

“We’ve improved from the first game to the next. We just keep getting better,” Boston-Gains said. “The coaches we have are probably the best in the world.”

He made sure to shoutout defensive coordinator, Robert Langhout, especially as the best.

To go along with the stellar play from the defense, the offense made sure to do their job. They manage to total four touchdowns on the ground accompanied by a lone passing touchdown from Jai’lin Mccurdy.

“It feels good that the team is starting to gel together,” Lucas said. “We’re starting to see each other’s talents and understand the value of playing together as a team. I’d rather be peaking at the right time, which is at the end, rather than peaking at the beginning and fall off.”

The Bulldogs play on the road next week against Horseshoe Bend as they look to continue their win streak.

By Kevin Eckleberry The LaGrange Daily News LaGRANGE — They were pushed, but when the dust cleared and the clock... read more