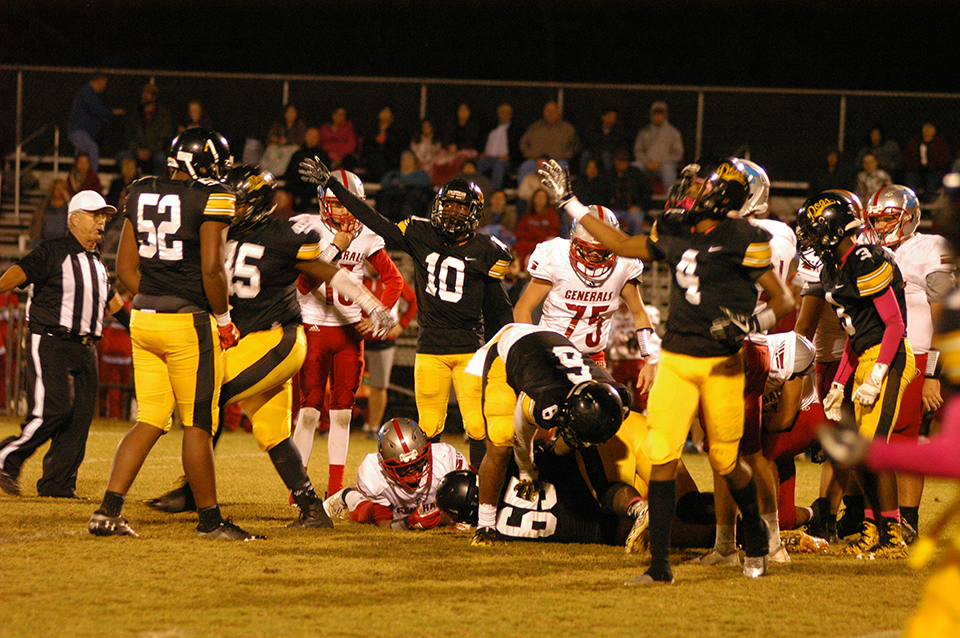 Wayne Clark | Times-News IT’S OUR BALL: Trevor Vines is on the bottom of the pile with the football in his arms after a dominant play by the LaFayette defense. Keandrae Peterson (10) and Jordan Walker (4) are signaling first down Bulldogs. The turnover set up a touchdown for LaFayette in Friday’s 35-6 win over the Horseshoe Bend Generals at Bulldog Stadium. LaFayette now heads to the 2A playoffs after having won five games in a row.

LaFAYETTE — The LaFayette Bulldogs on Friday night got exactly what they needed heading into post season play, a fifth straight win by a lopsided score. The Bulldogs defeated the Horseshoe Bend Generals 35-6 to finish the regular season 6-3 and 4-2 in 2A Region 4.

The defense was spectacular, totally shutting down everything the visitors tried to do. The only score Horseshoe Bend could muster came on an offensive mistake by LaFayette. A lateral was mishandled and returned 70 yards for a score early in the game.

The Bulldogs scored on the opening possession, going 63 yards to take a 7-0 lead. The series was highlighted by the running of junior backs Victor Tolbert and Keandrae Peterson. On a first-and-ten play from the General 13, McCurdy found Jordan Walker open on the right side of the field inside the five. The receiver grabbed the ball near the goal line and made a neat move on a defender to get in for a score. Markevious Tilbert’s PAT made the score 7-0 in favor of the Bulldogs with 7:50 left in the first quarter.

A fumble recovery by big Trevor Vines had the Bulldogs in business moments later on the Horseshoe Bend 40. But just when it looked like it was going to be 14-0, disaster struck in the form of a botched lateral.

An alert Horseshoe Bend defender picked it up and ran it back close to 70 yards for what would turn out to be their only score of the game. In an attempt to take the lead, they went for two points on the conversion, but the LaFayette defense held them out of the end zone. With 5:46 showing in the opening period, the visitors had cut LaFayette’s advantage to 7-6.

Sophomore LaQuavian Daniel got things going LaFatyette’s way again on the ensuing kickoff, returning it from the Bulldog 18 to the General 30.

In lightening-like fashion, LaFayette was back in the end zone on a pass play from Curdy to JaMariae Daniel that covered 21 yards. Markevious Tolbert’s point-after extended the Bulldog lead to 14-6 at the 3:46 mark of the first period.

The Bulldog defense held the Generals to a three-and-out, forcing a punt. Jordan Walker had a beautiful return, outracing almost the entire kicking team until the last man got him at the Horseshoe Bend 30.

A facemark penalty added on moved it down to the 15. A pass over the middle from McCurdy to Peterson made it 20-6 with 2:21 still left in the first quarter.

For a brief moment, it looked like the Bulldogs had made it 22-6 on a crowd-pleasing play when 300-pound lineman Joshua Holloway in at fullback powered across the end zone for an apparent score. He even did an end zone dance, sending the crowd into a frenzy. It didn’t count, though, as the Bulldogs were flagged for a false start. The did make it 21-6 when Tolbert booted through the extra point.

Another fumble recovery by Trevor Vines stopped a General drive at the LaFayette 28.

The offense took to the field and drove it 72 yards to make the score 27-6. A 19-yard pass from McCurdy to Daniel extended the lead to 21 points with 3:18 left in the half.

Horseshoe Bend entered the game a beaten up, disspirited football team. They’ve had more than their share of injuries, and to keep from having more against a talented., physical team, their coaches asked for the final three quarters to be shortened to eight minutes each.

The clock ran continuously to keep from lengthening a contest that had already been decided.

The Bulldogs drove 68 yards early in the final period to add one more score. The key play of the drive was a long pass from McCurdy to JaMariae Daniel. That advanced the ball 35 yards to the Horseshoe Bend 33.

Two runs by Victor Tolbert moved the ball to a first-and-goal on the eight.

A couple of more runs by Tolbert got it inside the one, and on third and less than one, McCurdy followed a line surge into the end zone for what would be the final TD of the game.

It looked like the conversion was going to fail on a bad snap, but kicker Markevious Tolbert picked up the ball and raced around left end, making it inside the pylon to add two more points to the LaFayette total.

That would be the final score.

For the rest of the game, Coach James Lucas gave his younger players some extended playing time.

They were able to hold the Generals out of the end zone, preserving a shutout on the part of the defense. Horseshoe Bend got their only score off the LaFayette offense.