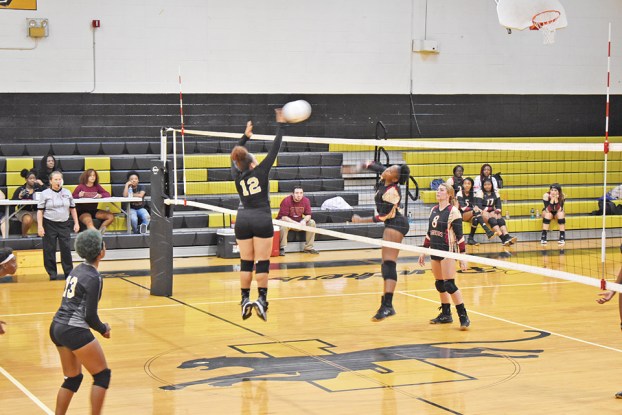 LANETT — The Panthers volleyball team struggled to handle Russell County at home on Thursday evening at home when the Warriors swept Lanett in three games. Lanett lost the final two games of the match 9-25 and 12-25.

Panthers varsity head volleyball coach Krisse Story gathered both her JV and varsity players around after the loss and gave them an impactful postgame speech.

“[The team] was being lackadaisical,” Story said. “Not showing any energy or excitement for the game. We have not played at home in several weeks and for us to come back home and have a great crowd to play the way we did took me back to our first season or two and I was very disappointed in the effort I saw.”

Members of the Lanett football team and various parents around the community showed up to the match to watch the Panthers get visibly frustrated about missing floor assignments and hitting the ball out of bounds. Players’ heads began to drop as the parents continued to encourage the team, despite the score.

“It’s not so much about who won the game,” Story said. “I want to win every match, I do but I also understand that we’re not going to win every match. I want to see more effort than what we had tonight and that’s basically what it was, I don’t see that commitment, I don’t know if they’re getting more tired because we’re near the end of the season but I don’t see commitment.”

On a brighter note, the varsity team has made strides from the first preseason practices that the team had in August. Outside of getting frustrated about mental errors, the Panthers looked more confident in their abilities on Thursday night than before.

“We have progressed, I’ve seen a lot more out of my seniors, a lot more senior leadership,” Story said. “We’ve had some injuries. Tonight, we were missing one of our key players. We had to make some quick adjustments, people were in places they’ve never played so that was part of the problem but I accept no excuses. You should know every position, if you play volleyball, you should know every spot.”

Lanett has only three games remaining before Area Play this season. Like many athletes at the school, a lot of volleyball players are also involved with winter sports like basketball and cheerleading but Story said that she doesn’t want her athletes to lose focus on the task at hand.

“Staying positive is what I’m aiming for as far as trying to keep their focus and let them know that we still have a chance to do well in the area so that we advance to sub-state.”

Lanett returns to the court next Thursday at Randolph County. The varsity-only match is scheduled to start at 5:30.

VALLEY — The concern for concussions in youth football has been a topic of discussion across the country. Last week... read more