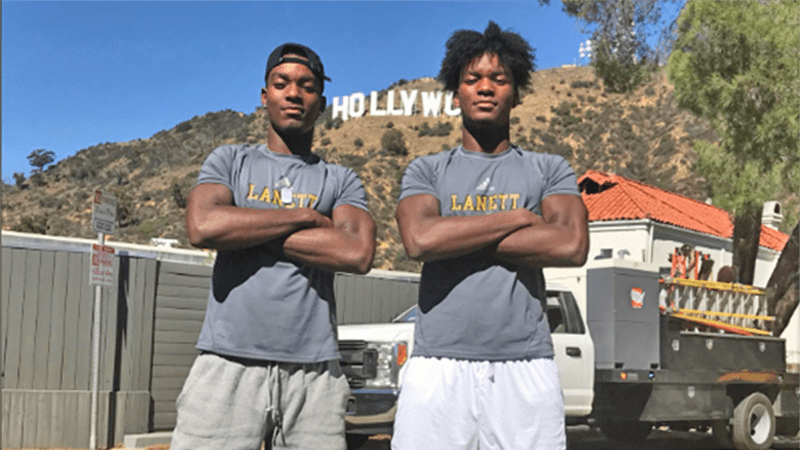 The brothers were on the West Coast reasons they called “confidential,” reasons they said will become “public in the future.”

“It was great, I felt like a celebrity,” Zameron said of the trip. “Meeting a lot of them (celebrities), it was great.”

Although Cameron and Zameron couldn’t go into the details of what they did in California, the 6-foot-8 Zameron posted a picture of him wearing a basketball jersey that read “Huncho” on Twitter. In the social media post, Zameron tagged rapper Quavo, who recently released his first solo album “Quavo Huncho” last Friday. Quavo is one-third of the rap group Migos. Videos of Quavo playing basketball with a camera crew on the court with the players also surfaced on social media this week from other accounts.

The twins didn’t identify him, but they said they did interact with one star on the trip.

“We built a good relationship with him,” Zameron said. “We told him a few things about Lanett. Yeah, he knows about us.”

One day during the trip, Cameron and Zameron took a trip to the famous “Hollywood” sign while sporting Lanett shirts.

“I had the idea before we got there that I wanted to let people know where we were from,” Cameron said. “We’re from Alabama, but not just some big city in Alabama, we’re from Lanett. We made it all the way to Hollywood, so we had to make sure we put on those shirts and represent.”

The Boozer brothers said they were given the opportunity to take the trip through their father, Cameron Sr. Their father is a former Auburn University basketball player.

The twins inherited their dad’s height and athleticism, as Cameron stands at 6-foot-9. The brothers play sports year-round as they’re on the track & field, basketball and football teams at Lanett. Zameron finished the 2018 track season with a second-place finish in the high jump at the state championship. The two draw attention everywhere they go in the community, but they said they’re used to the extra eyes being on them now.

Cameron and Zameron returned home on Wednesday and joined the football team in practice that afternoon.

The next big goal that the brothers are focusing on is to help the Panthers win their fourth-consecutive basketball state championship. The brothers will be called upon more than seasons past after Lanett graduated 6-foot-8 Emanuel Littles and 6-foot-7 Anquaevious Pollard last season. Pollard was a two-time 2A state player of the year while Littles was won state tournament MVP honors in 2018.