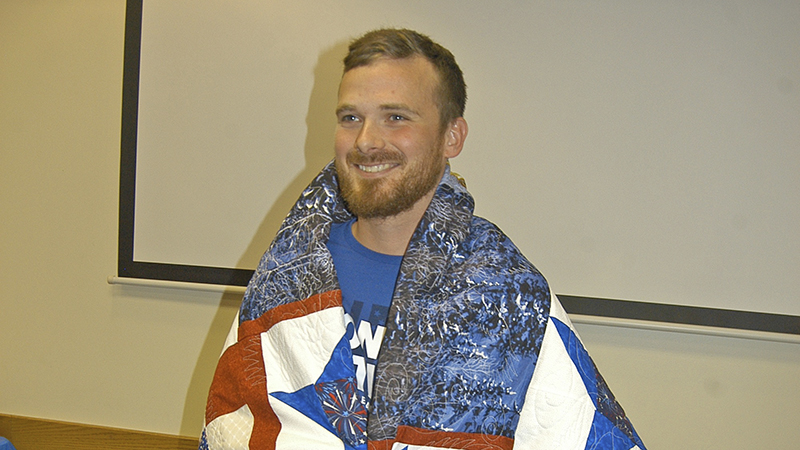 Jon Meacham was all smiles after receiving a Quilt of Valor at Friday morning’s program at the Bradshaw-Chambers County Library. --Wayne Clark

Veterans from World War II forward witnessed a wounded veteran from the Iraq-Afghanistan conflict receive a Quilt of Valor, heard archivist Robin Brown review the history of the American Legion and received an update from Post 67 Commander Lanny Bledsoe on current activities of the l0cal American Legion chapter.

Representing the Georgia-Alabama State Line Chapter of the Quilts of Valor, Shelia Simpson presented a quilt to Jon Meacham, who was wounded in Afghanistan.

Catherine Roberts founded Quilts of Valor close to 15 years ago when her son was serving in the Afghanistan/Iraq wars. Her and her small quilting group made the first quilt presentation to a wounded solider at Walter Reed Hospital in Washington, D.C. Quilting groups all over the U.S. followed their lead and started making quilts for veterans in their local areas. The total number of quilts presented to veterans is nearing the 200,000 mark.

“There are so many more veterans who deserve to be honored in this way,” Simpson said. “We thank each and every one of you veterans who are here this morning for your service to our country.”

A special word of thanks was given to Howard Kitchens, who served in the U.S. Marines during World War II.  The State Line quilters wanted to do a quilt for him but he asked for Jon Meacham to be so honored. Kitchens made the point that younger veterans who have sacrificed for our country and who have their whole lives ahead of them deserve this recognition as much as older veterans.

Robin Brown told the big group that the American Legion had its roots in the ending of World War I, which happened almost 100 years ago.

“With the armistice reached on Nov. 11. 1918, the Great War had finally ended,” she said. “Soldiers did not immediately return home, however. Some remained with the Army of Occupation through 1919.”

The overall U.S. commander, Gen. John “Black Jack” Pershing, saw a need to boost morale among his troops in the post-war era.

“He turned to a decorated young hero, who happened to be the son of an old friend, President Theodore “Teddy” Roosevelt. That son, Theodore Roosevelt Jr., suggested allowing the men to organize a veterans organization.”

“Pershing agreed,” Brown continued. “Convening in Paris, the first caucus for veterans of the Great War met from March 15-17, 1919. They settled on a name: The American Legion,” Brown said.

The American Legion is a non-partisan, non-religious and a not-for-profit organization dedicated to supporting U.S. veterans, advocating patriotism and serving local communities.

Brown said that local posts of the Legion began to form in 1920, shortly after the national organization got its footing. “LaFayette was the first to organize a local chapter,” she said. “That was in July 1920. Lanett and Fairfax organized posts in November 1920. In the early days, dues were 75 cents. In Alabama, the (Ladies) Auxiliary was organized on Oct. 9, 1922. It quickly grew and became a key partner of the Legion. It was said that if you wanted results, ‘tel-a-phone, tel-a-graph and tell-a-woman.’”

“By the early 1930s,” Brown continued, “the Lanett post renamed itself in honor of a local World War I veteran, Ashburn Fennimore Cox. He had served with the Rainbow Division, which saw heavy fighting and high casualties in France. Pvt. Cox was killed in action on July 28, 1918. When the Fairfax and Lanett posts merged around 1935, the post continued to be called the A. Fennimore Cox Post. In our World War exhibit (at the library), a letter and a handkerchief mailed to his family are on display. Eventually, the name was changed back to its original name, the Chattahoochee Valley Post.”

As a national organization, the American Legion has lobbied and won recognition and benefits for veterans. It was crucial in the formation of the Veteran’s Bureau, today the Veteran’s Administration. In 1943, the Legion drafted a GI Bill of Rights. FDR signed the GI Bill in 1944.

It has sent local high school students to Boys and Girls State and continues to hold Memorial Day and Veterans Day programs each year.”

In 1979, Post Commander A.L. “Red” Hay oversaw the construction of a lasting monument to the area’s servicemen and women – Veterans Memorial Park. The Legion dedicated the park on Nov. 11, 1979. The park is dedicated to all U.S. veterans, and especially to those who fell in service of our country.

In more recent times, granite monuments have been placed in the park that include the names of local soldiers who were killed in WW II, Korea, Vietnam and Afghanistan/Iraq.

Bledsoe thanked Jon Meacham for his service to our country.

“Jon was there when the wars in Afghanistan and Iraq were hot,” he said. “Every week his family sent him care packages containing the basic necessities a soldier would need. He was able to return back to the U.S. after being wounded. Thankfully, the fighting in Afghanistan and Iraq is not as intense as it was, but there are still Americans in harm’s way and some of them are being killed and wounded.”

Bledsoe invited everyone to this year’s Veterans Day program, which will be taking place in Veterans Park (weather permitting) at 11 a.m. on Monday, Nov. 12.

The local post has a Day for the Veteran in July. Bledsoe said the event has the goal of helping local veterans make sure they are getting the benefits they are entitled to because of their service.

“Getting through the VA can be complicated,” he said. “We want to make sure our veterans are getting the help they need. The problem is finding the right person to talk to. We want to help point local veterans the right way if we can.”