Locals outdo themselves with Halloween decorations 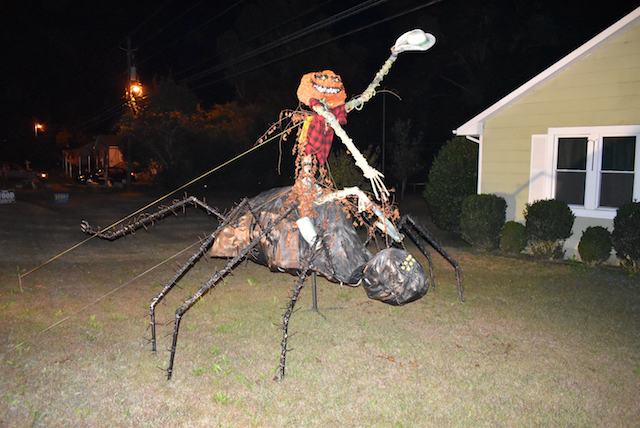 Kelly and Contessa Meacham make attempts to outdo themselves each year with Halloween's decorations. This year’s creation is a salute to the tradition of the Chambers County Sheriff’s Rodeo. - Wayne Clark

HUGULEY — Anyone who would like to see a pumpkin-headed cowboy riding a giant spider rodeo style can check that off their bucket list by driving out to the home of Kelly and Contessa Meacham off Highway 50 near the intersection with Phillips Road.

The Meachams outdo themselves every Halloween season with a novel display in their front yard. In past years they’ve had a UFO made from a satellite dish landing in their front yard, the next year a crashed UFO with alien paramedics carrying away an injured space traveler on a stretcher and last year a 10-foot-tall scarecrow with a pumpkin head standing alongside two smaller ones, one of which was picking up a baby scarecrow.

This year’s creation is a salute to the tradition of the Chambers County Sheriff’s Rodeo. The cowboy has one of the large pumpkin heads from last Halloween and two very long arms, one of which is holding a large cowboy hat made from the packaging a wreath came in with a white bowl glued to it. From a distance it looks like the real thing.

“We’ve been living here for 18 years and have been doing this at Halloween for the last ten years,” said Mrs. Meacham. “We start working on a new one in August. People are always asking us what it’s going to be and when it will be on display. Kelly likes to keep it a secret until we unveil it around the first of October.”

This year’s creation stood up to the wind and rain of Hurricane Michael.

“We were worried it would be blown apart,” Mrs. Meacham added, “but it help up pretty well. We only had to make some minor adjustments.”

Much of the bucking bronco creation is framework from PVC pipe covered with canvas material and then painted. Once it was finished in the workshop out back, the Meachams enlisted the help of daughter Bailey and son-in-law Justin to move it to the front yard.

Inside the giant spider’s body is a picnic table. No, he didn’t eat it – it’s there to stretch out the canvas. The spider’s legs are made of kinked PVC pipes that are painted with some pipe cleaners added to make it look more realistic. The cowboy’s toothy grin is something made from white buckets cut up to resemble teeth.

“We really don’t spend that much on our displays,” Mrs. Meacham said. “We recycle items from past displays and make use of things we already have. We both work hard and we’re getting older. We keep doing it because people are always asking what we’re going to have up for Halloween this year. People are always stopping to ask us about it and to take pictures of it. We don’t mind that at all. We encourage them to have their picture taken with it. We just ask that they don’t touch it. We don’t want them to possibly break it.”

The cowboy and spider will be the central attraction for a carnival the Meachams will be playing host to a few days after Thanksgiving.

“We have it for our grandkids,” Mrs. Meacham says. “We have 13 of them. We love having them here a few days after Halloween. We all have such a good time.

“We make all kinds of things in our shop,” Mrs. Meacham adds. “Kelly works on lots of projects. We’ve even thought about having  a Halloween shop.”