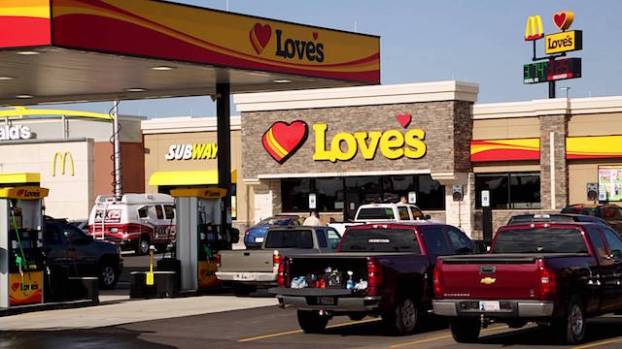 Love's Truck Stop has purchased 20 acres of land near Exit 2 on I-85 in West Point, and plans to open a new location on the property in the fall of 2018. - Contributed

WEST POINT – Love’s Travel Stops has purchased 20 acres of land located near Exit 2 on Interstate 85 in West Point and plans to build a 12,000 square foot facility on the site. The land, which was previously owned by the Johnson and Harrell families, has been under contract with Love’s since September of 2017.

“We were certainly not their only alternative [to purchase land], and I believe they had another first choice,” Kirk Johnson, speaking on behalf of the families, said. “I went to the city, the city came in and met with Love’s multiple times. Really if it had not been for the city’s perseverance with this, I don’t think [Love’s decision to come to West Point] would have occurred.”

Per Johnson, Love’s approached the families in late summer of 2017. After approximately 60 days of negotiation, a contract was reached in September of the same year, stipulating Love’s intent to purchase the property, contingent on Love’s ability to meet City of West Point and Department of Transportation inspections and stipulations. After approximately one year, the final hurdles have now been cleared.

“The city, the DOT and the buyer all had to get on the same page with this,” Johnson said.

Love’s is planning to invest $20 million into the new West Point location, per a press release from the city, and the new location will include a truck stop, restaurant, a Speedco and gourmet coffee. The location is also expected to have a noticeable trickle-down effect on the West Point and Valley area economy, per West Point Mayor Steve Tramell.

“You don’t have to be a truck driver to want to go to a Love’s Truck Stop,” Trammel said. “It is a destination. What I like about it is you will have people coming in from Louisiana, Mississippi, Alabama coming into Georgia, they are going to want to stop as they enter our state at the Love’s Truck Stop. Once they’re there, it’s just a hop, skip and a jump to come on downtown and do some shopping and eating.”

Love’s has more than 460 locations spread throughout 41 states. This new location will be under construction by the spring of 2019 and is scheduled to open in the fall of the same year, per Trammell. Phone calls placed to Love’s corporate office in Oklahoma City, Okla. were not immediately returned.