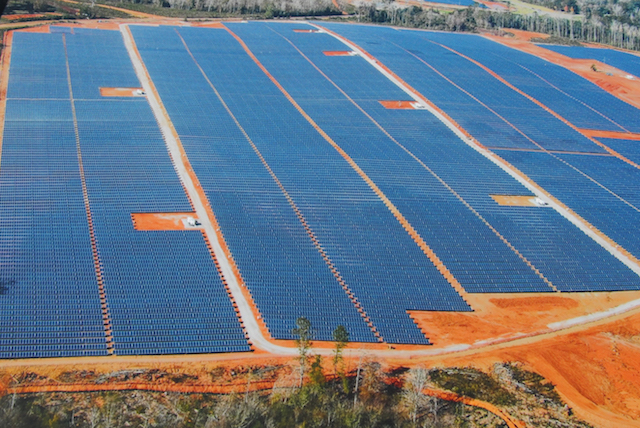 AL SOLAR FARM A, located on the southeast side of LaFayette, is an impressive sight when seen from the LaFayette Bypass. The 1,100-acre site has more than 334,000 solar panels producing electricity. In the coming years, AL Solar Farm A will be joined by Solar Farms B & C, which are going to be developed in the Cusseta area not far from the Chambers County Industrial Park. - Contributed

The same south Florida-based group that initiated Solar Farm A coming to Chambers County is behind B and C coming here.

“They like the people, the environment, abundant sunlight throughout the year and communicating with the people here,” said County Attorney Skip McCoy.

The two new solar farms will be on opposite sides of County Road 82, also known as the Fairfax-Cusseta Road, not far from the Lee County line. Solar Farm B will be on a 380-acre site that’s being purchased from the Henry Jenkins Estate. Solar Farm C will be across the road on a 1,000-acre site being purchased from Harold Prather. Some of that land crosses into Lee County.

McCoy said that development would be taking place over the greater portion of 1,400 acres.

“This is phenomenal for a county our size,” McCoy said. “They are committed to an investment of between $70 million and $80 million. We’ve committed to a ten-year abatement of ad valorem taxes.”

Under Alabama law, school taxes cannot be abated. Public schools in the county will be getting their share of ad valorem taxes from the start up of the project.

“We’re still working on the project agreement,” McCoy said. “I would say that we are at around 95 percent agreement on the terms.”

The project agreement will have to be finalized before Alabama Power becomes a partner. Alabama Power will have to have an off taker for the amount of electricity produced at the solar farms. Walmart agreed to do that with AL Solar Farm A. Once that’s worked out, the Alabama Public Service Commission will have to give its approval to the arrangement. No potential problems are anticipated with that.

“The grubbing and land preparation at the site will probably take a year,” McCoy said. “This project could be in service by 2021. Considering everything that’s being pulled together, that’s pretty quick, but it can be done.”

Having three solar farms in production will be a huge boost for the public school systems in Chambers County.

“From the start, they will be getting full value from the ad valorem taxes,” McCoy said. “The county will have to wait for ten years. It will be a huge thing at that time.”

McCoy said it’s a big opportunity for Chambers County just to have AL Solar A. Having B and C will be much bigger.

“During construction, there’s over 300 workers in town,” he said. “That has an economic impact on your area. That’s an extra bonus for the project.”