No. 1 ranked Lanett coasts to 67-0 win over Verbena 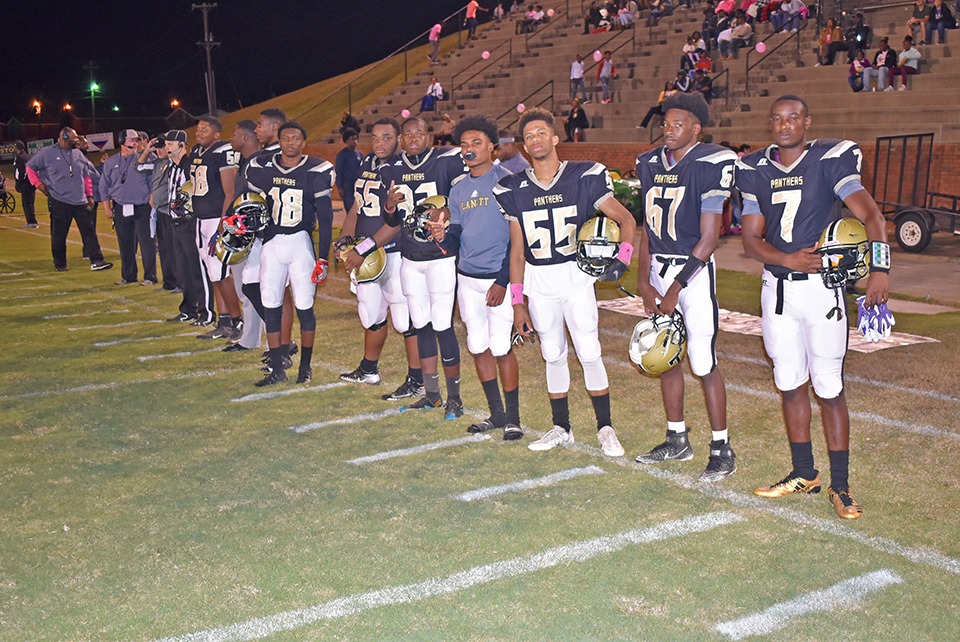 SENIOR NIGHT: A group of Lanett football seniors pose for a picture before kicking off their final regular season game at home. Photo by Rashad Milligan

LANETT —  It was just another Friday closer to the playoffs for 1A No. 1 Lanett in its matchup against Verbena. The Panthers came out victorious, 67-0.

“We had a great week of preparation,” Lanett head football coach Clifford Story, Jr. said. “I told the kids that this team doesn’t have any superior talent, but we’ve got to start working on Lanett. We executed everything we’ve worked on in practice and it just was a reflection of preparation.”

The game began with a quick Lanett defensive stop. Senior athlete Trikweze Bridges scored on a 43-yard touchdown pass with 8:58 to go in the first quarter on a play where the four-star recruit simply beat his defender on the edge after making the grab.

After another quick Verbena possession, junior quarterback Kristian Story ran for a 32-yard touchdown on the first play of Lanett’s second drive with 6:50 remaining in the quarter to push the lead to 14-0.

Quae Houston caught a wide-open 60-yard pass for a touchdown with 5:53 to go in the first quarter. Kristian Story made a “fire call” and threw to Kolby Davidson for two points after a bad snap on the extra point field goal attempt to increase the lead to 22-0. The score occurred on the first play of Lanett’s third drive of the game.

There was a moment of concern near the end of the first quarter when Verbena’s quarterback was on the bottom of the pile after a play and hurt his back. The Verbena player laid face down on the ground for a while before being carted off the field on a stretcher. EMS officials carted the quarterback off the field due to precautionary reasons, as he was moving around on the field and remained responsive, Story said.

“I think he’s going to be fine,” he said. “He was moving everything well. I think they were taking precautionary actions because of the area he was hurting in.”

On the same play, but unrelated to the back injury of Verebena’s quarterback, a Lanett defender was disqualified from the game after swinging on a Verbena player who had his hand inside of the Lanett defender’s facemask, scratching the Panther just above his eye.

Story said that he felt the team cleaned up its penalties after the first quarter.

“Overall, we didn’t jump offsides,” Story said. “We snapped the ball, didn’t have any illegal procedures or delay of game. Those are the things that we have tried to work on, and moving forward we’re just going to keep working on Lanett. [We’re going to] try to get better each week because the playoffs are going to be here soon and there’s going to be a lot of tough competition down the road.”

Shortly before kickoff, community resident Narfunda Gibson Ross was recognized on the field for being a breast cancer survivor. Pink balloons were released in the air as Lanett’s seniors lined up along the sideline for the group’s final regular season home game.

“They’re a great group of kids,” Story said of his seniors. “Many of them have been playing for me since eighth grade, many of them were guys that I moved up. They’ve done a great job, they’ve helped put this program on the map. They’re champions. They’ve done it in basketball, football. A lot of them have received scholarships to play at the next level. I’m elated, I’m going to hate to see them go once this thing is over, but this has been a great group and a great run. We hope to end it with a bang. Overall they’re great kids, they have great parents.”

Lanett wraps up the regular season next week at Billingsley.