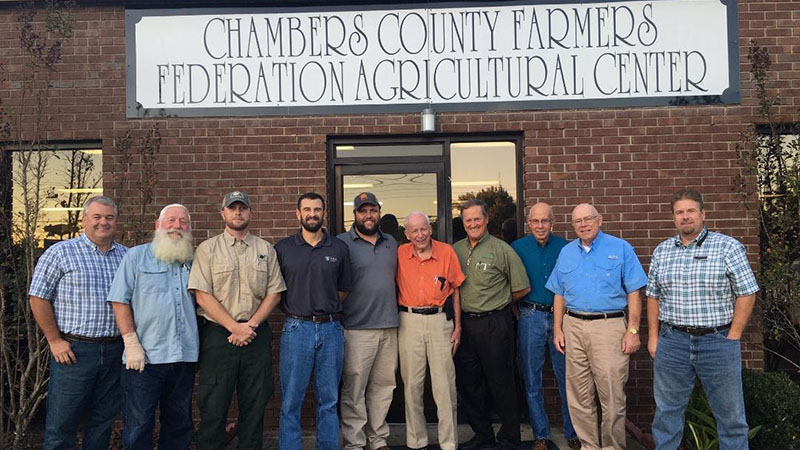 LaFAYETTE — At Thursday evening’s annual meeting, the Chambers County Forestry Landowners heard from a Norbord official on how things have gone at the Barton Mill plant since its return to production, and heard an analysis from local forester T.R. Clark on whether it’s better for a landowner to plant pine or hardwood.

Mike Ellington, a lead person for forming and the press, talked about the production process at the local mill. He said that everyone with the company was most pleased to have Barton Mill back in production and that it was one of Norbord’s most modern production facilities.

Norbord is the world’s largest producer of Oriented Strand Board, commonly known as OSB. It’s a lower-priced substitute for plywood and is very popular in the building industry. Forty-one percent of the OSB Norbord makes in a year’s time is produced in the U.S., 36 percent in Canada and 23 percent in Europe.

“It was tough when the recession hit in 2008,” Ellington said. “We’re now trying to build a more diverse consumer market than before.”

He knew there was trouble for OSB producers in 2009 when he could go to a Lowe’s or Home Depot and find sheets of OSB on sale for $5 a sheet. It costs more than that to make it.

The economy has improved since then, the building industry has rebounded and prices have stabilized for OSB.

Norbord is a huge economic engine for Chambers County. The company spends $20 million on logs. That’s good for loggers in a 50-mile radius around the plant. The mill spends $3 million a year on its electric bill, has 130 employees and pays well.

The Toronto-based company made a strong commitment to the local community when it went back into production. “We invested $53 million in getting the mill up and running,” Ellington said.

In the second part of the program, F&W forester T.R. Clark offered some learned advice from 15 years of experience on whether it’s better for landowners in this part of the country to plant pine or hardwood. The answer is simple: pine, because it grows much quicker.

“In Chambers County, we are a pine-dominated wood basket,” Clark said. “Hardwood is a good supplemental market, but pine is king.”

Clark added that eucalyptus trees in South America grow faster than do pine trees in the Southeastern U.S.

“They won’t grow here because of cold weather,” he said.

Program emcee Jerry Schwarthauer told the attendees that it might be good of them to visit a pine plantation should they get the chance.

“They are genetically experimenting to grow faster and with better volume,” he said. “You are so much better off if you can get to that point.”

4-H advisor Dick Conway introduced members of Chambers County’s forestry judging team. This past year they won the state championship, advancing them to the national finals in Weston, West Virginia, where they competed against 15 teams from all over the U.S. They won first-place in that event as well.