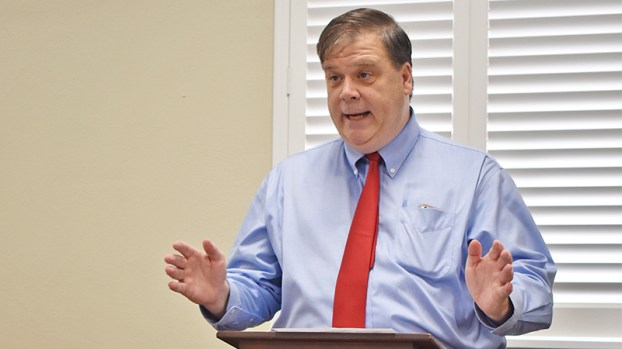 WEST POINT — Dr. Kirk Payne of Kalamazoo, Michigan was at the West Point Lions Club meeting Wednesday afternoon to inform members of the Greater Valley Area on the advancements in cancer screening and treatment, specifically touching on a development that happened this month.

The U.S. Food and Drug Administration, Payne said, recently approved expanded use of Gardasil 9, a drug that prevents certain cancers and diseases brought on by HPV, to individuals 27 through 45 years of age. It had been previously reserved for those 11 through 26 years old.

This information came near the end of Payne’s 30-minute presentation, throughout which he discussed the many forms of the disease and what common practices were used to screen and treat them.

Starting off, Payne emphasized the importance of preventative screening. In cases of colon cancer, colonoscopy screening has dramatically reduced the formation of actual cancer cells. The same is true for breast cancer with mammography screening and its ability to catch the disease in its early stages.

October is Breast Cancer Awareness Month in America, and Payne said that screening should begin for women with a family history of the disease at around 25 and those without at around 40. Following that, yearly or biennial screenings should become commonplace.

He also spoke on lung, stomach and prostate cancer, each of which has had strides made in screening but varying degrees of treatment success.

“The biggest advances in cancer we don’t need screening for,” he said. “For example, testicular cancer grows so rapidly that a man will get help because it’s painful. That’s a disease that we’ve gone from 1976 [when it] was 95 percent fatal usually within about 6 weeks… to, with the same four drugs, have made the survival rate about 95 percent.”

Ending on the recent development, Payne discussed how even with guaranteed, proven results and testing, some are still hesitant to try it.

“There was a lot of pushback, not from the medical community because we are always happy with a vaccine that can prevent something… but pushback because of the thought that ‘if we give kids medicine that is going to prevent the human papilloma virus, which is a sexually transmitted disease, we are going to encourage sexual behavior,” he said.

Even with the pushback from people, though, there are clear results from Gardasil 9.

”The Centers for Disease Control and Prevention has stated that HPV vaccination prior to becoming infected with the HPV types covered by the vaccine has the potential to prevent more than 90 percent of these cancers, or 31,200 cases every year, from ever developing,” said Peter Marks, M.D., Ph.D., director of the FDA’s Center for Biologics Evaluation and Research in a statement.

With the evidence provided to the room, Payne urged members of the Lions Club to spread the word and vaccinate those close to them.

“The three shots you get for this, I can’t think of a better thing to get someone,” he said. “The opportunity to prevent this kind of suffering that a person has is quite huge.”

Local governments have signed proclamations recognizing next week as Red Ribbon Week in Troup County, which raises awareness of the... read more