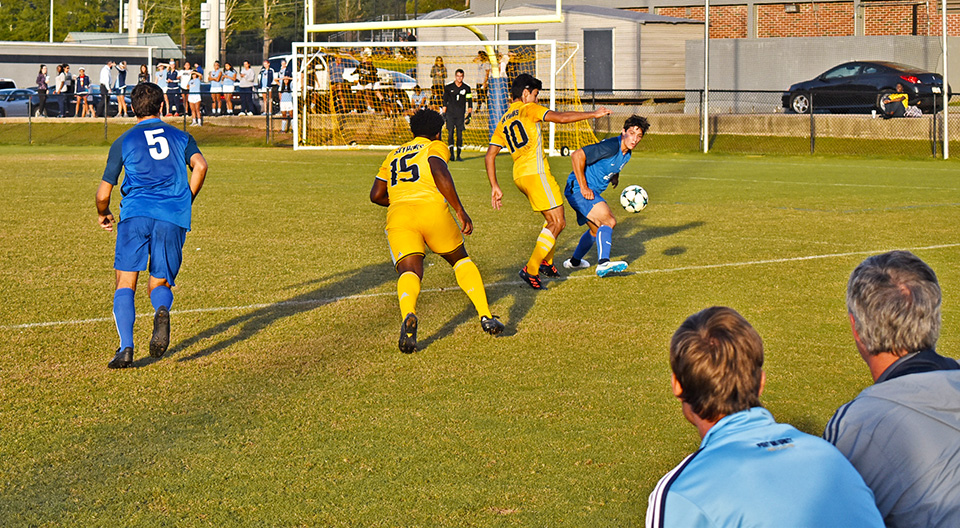 ON THE PITCH: Point University’s Juan Gomez and Christopher Gomez battle for possession during the Skyhawks matchup against No. 12 Reinhardt. Photo by Rashad Milligan

WEST POINT — It was the statement the Skyhawks of Point University were waiting to make all season.

After making headlines earlier in the year for going on a nine-game winning streak, the Point men’s soccer team was still looking to prove the program’s legitimacy.

“No one was really going to take us seriously until we got that top-25 win and for it to clinch the conference title, it’s amazing,” Point men’s soccer head coach Jonathan Lenarz said.

“Of course I could have imagined it,” Lenarz said. “Teams have to learn how to win. We learned to win one game at a time and by the time the tough games came, they learned how to win. It came down to our first game when we tied with a team that hasn’t had a great year, and we played 70 minutes without a player. A player got a red card, and they learned how to play against adversity, and that translated into so many wins down the stretch.”

Reinhardt struck first with a powerful strike for the game’s opening goal at the 32:19 mark.

Point became very aggressive after the goal, and it didn’t take long for them to leave their mark on the match as well. Senior defender Cesar Lazarini scored on a header from a Skyhawk corner kick at 35:29. The score brought the fans in the River Bowl to its feet.

Point continued to control the time of possession for the majority of the remainder of the first half until Reinhardt added a couple of attacks in the last two minutes before intermission.

There was no glaring time of possession advantage to start the second half. After a couple of consecutive attacks by Point, senior Jeisson Palencia managed to creep the ball across the goal line at 68:46.

“Jeisson [and brother Brayan], the twins, have just been a Godsend to me two years ago from where I moved from two years ago,” Lenarz said. “They’re so steady, and Jeisson gets the game-winner.”

There was a great turnout on Tuesday night, with other Point students standing for the entirety of the game cheering on the Skyhawks. One Point soccer player who recently tore his ACL broadcasted the game live on periscope and screamed from the stands in support of his teammates.

Now, the Skyhawks have grabbed the attention from the rest of the NAIA and Lenarz hopes the community will continue to rally around the team.

“A lot of people in this community, even if they don’t know soccer, can love what’s going on here with the personalities and human beings that have great character,” Lenarz said. “They expand the global culture here in the Greater Valley Area. It’s awesome.”

The Skyhawks have two home games remaining in the regular season, one this Saturday at 4 p.m. and the final one next Monday afternoon at 1 p.m.