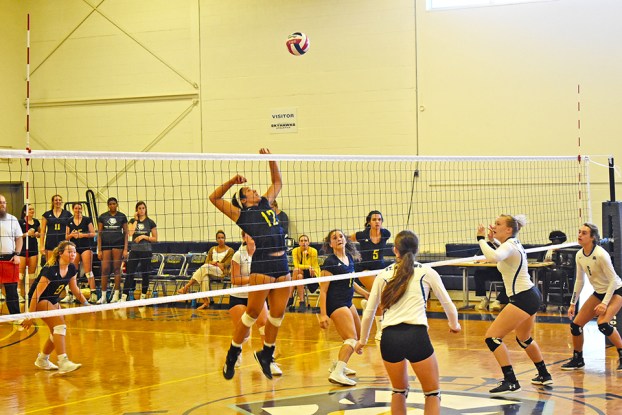 Point senior leads volleyball team to another victory against St. Andrews on Thursday

WEST POINT — The Skyhawks are back on track.

Despite St. Andrews’ losing record going into the match, last season’s competitive matches with the Skyhawks kept Point on its toes during Thursday’s meeting.

“This is what we were preparing for,” Point head volleyball coach Amanda Jones said. “It definitely feels good to rebound and reset.”

The Skyhawks are now 9-2 in conference play and 15-10 overall after the win.

“Tuesday’s loss [against south division No. 1 Reinhardt] was one of the best losses I’ve ever had in my career,” Jones said. “A No. 1 [team] in the conference, undefeated, we beat them 25-15 and that was the second set they dropped the entire conference season so we were pretty excited about that. We couldn’t execute in the second, third and fourth set but definitely encouraging results to know that we can definitely get them next time.”

The Skyhawk teammates looked rejuvenated during the dominating performance on Thursday. Before the third set began, members of the team greeted each other with a unique handshake that varied for each individual.

Senior Tatianna Dale simply had her way during the third set by attacking the ball whenever it was in her vicinity at the net and serving for an extended-period during Point’s scoring streak during the final game of the match. She finished the day with 12 kills with two errors in 20 attacks.

“She’s had back-to-back really good performances,” Jones said of Dale. “She’s getting to a place where she’s getting mentally tougher and she’s peaking in her career at the right time. I think her trajectory can even go higher so we’re excited that she’s been doing really well mentally and physically.”

Dale’s fellow tri-captain Julia Felix continued her streak of impressive performances with 36 assists and five digs on Thursday. Felix highlighted the team’s chemistry moving with confidence and fluidity that made the Skyhawks look like a group that has been together for years.

“Julia has really owned the captain position,” Jones said. “She’s a very dominant personality so it’s helped to hone her leadership qualities and really make her that floor captain. She’s in all of the game and she’s really doing a better job of instilling that confidence in her teammates.”

The Skyhawks continue their six-game homestand on Saturday morning against Allen University. Thursday’s early afternoon match brought out a nice crowd of Point students and the game this past Tuesday night against Reinhardt was packed.

“I love it,” Jones said of the fan support the team has received. “That makes such a big difference when they’re in it. We feel the love and feel the support, it’s really nice that they want that for us and it’s a big deal. When we don’t have anybody or not that many people here, it’s kind of a bummer and hard to get that energy going. We feed off the energy on this campus and we love it when they come out.”

Teams have now entered the last stretch of the year before the postseason, as October marks the final full month... read more