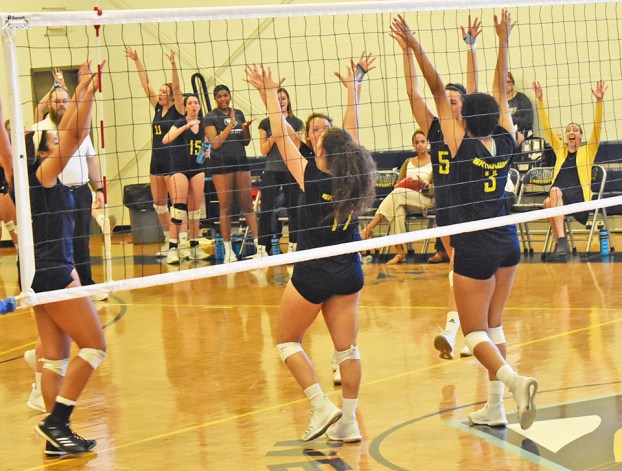 “I feel grateful that we have achieved the success the conference predicted,”  Point head volleyball coach Amanda Jones said, “but I am not content. We have so much more to accomplish and we’re looking toward getting better every day.”

Despite coming off of a loss to first-place Reinhardt on Tuesday, the Skyhawks have won 14 of their last 18 matches. Seniors Tatianna Dale and Karen Souza have been pivotal in the team’s success, and both players were honored during last Friday’s senior night.

“They have both been such bright lights in my life,” Jones said. “Karen brings such a passion and enthusiasm for volleyball and life. She and Tat have bought in to my goals from the moment they visited campus.”

Souza is a Brazilian native who came to Point from Monroe Community College in New York.

Dale is a tri-captain on the team who came to Point from Faulkner State Community College. She’s a Louisiana native who has been the conference attacker of the week three times this season. Dale currently leads the Skyhawks in kills and total blocks. She became the first player in program history to earn All-AAC first-team honors last season.

“Tatiana is a phenomenal young woman on and off the court,” Jones said. “She will leave as the most decorated player in our history and deserves every honor. She works very hard for her team, especially when no one is looking. I am grateful to have known and coached them both (Souza).”

Another tricaptain, junior Julia Felix, has been named setter of the week in the conference three times this season as well. She leads the conference in assists by a wide margin.

“She is our Tom Brady,” Jones said. “Everything runs through her, we count on her mental toughness, and to make good choices to lead the team. She’s done a great job this year.”

Jones’ goal for the team is to win out the remaining four games of the regular season to clinch the second seed in the conference tournament. The Nov.  8-10 tournament is in Kingsport, Tennessee this year.

WEST POINT — It was the statement the Skyhawks of Point University were waiting to make all season. After making... read more