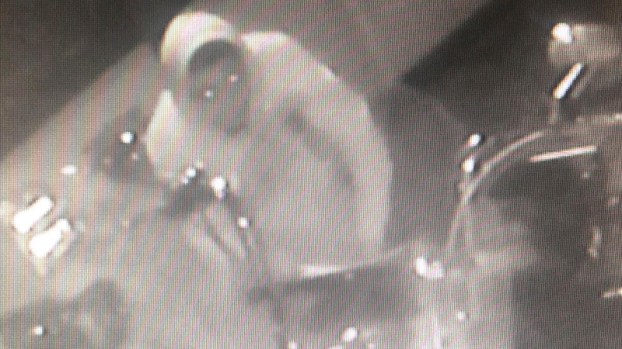 A security video shows a man breaking into vehicles in Valley last week. The full video can be viewed on valleytimes-news.com. --Contributed

VALLEY — A suspect has been arrested in relation to a string of car break-ins that were reported in Valley early last week.

Valley Police Chief Tommy Weldon said Sanders was identified by police after a victim shared video footage on Facebook of a man searching their vehicles and front yard area. With a suspect in mind, detectives patrolled Valley streets at night in an unmarked vehicle, eventually catching Sanders on the 4300 block of 18th Avenue at approximately 1:53 a.m.

“They had been looking all around the residential areas trying to find him, and they got him there,” Weldon said. “They were in an unmarked vehicle, so he didn’t realize it was the police. He was good at ducking and hiding when he saw police cars.”

When detectives approached Sanders he attempted to flee on foot. When officers apprehended him, it was discovered that he was carrying methamphetamine.

“They arrested him for meth, attempting to elude and resisting arrest,” Weldon said. “They interviewed him and got warrants for some of the break-ins that he admitted to and they could link him to. In a lot of the break-ins he didn’t actually take anything out of the vehicle, he just rummaged through the vehicle and didn’t find anything.”

Weldon said that the only stolen items of significance were two firearms and that Sanders allegedly admitted to trading the stolen items for drugs.

Police believe he was by himself during the break-ins and that he was not using a vehicle. All vehicles broken into were unlocked and no damage was done to them.

“We encourage folks to not leave valuables in their vehicles and to lock them,” Weldon previously told the Valley Times-News. “Occasionally someone will bust a window out, but its usually when they see a valuable inside. They’re not trying to bring attention to themselves, they’re just looking for unlocked vehicles that they can go through without making any noise.”

Security camera footage of the break-ins can be viewed on the Times-News website, valleytimes-news.com.