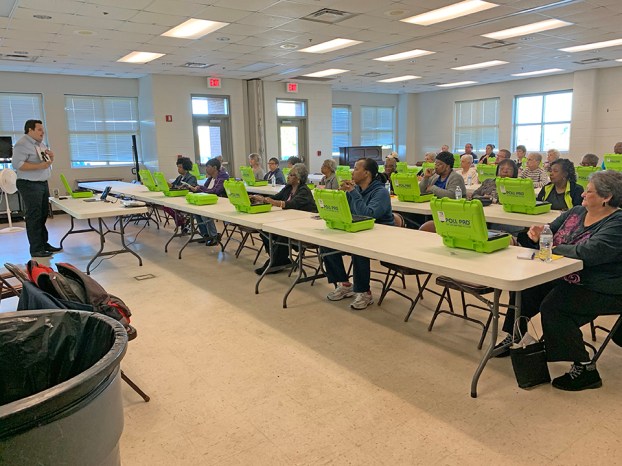 VALLEY — With the county’s implementation of the new Poll Pad sign-in system, a completely digital way of checking in at a precinct to receive a ballot, poll workers from across the Valley were at the Community Center Wednesday learning how they work.

Compact green cases holding the machines lined long, white tables facing the presentation screen. As people filed in and took their seats in front of each one, they were reminded to not open the boxes until told to do so.

“I know it’s very tempting to open the ‘present’ in front of you,” said Probate Judge Brandy Easlick’s Chief Clerk Nannete Brooks before the class began, “but there is a step-by-step process to set it up, and we don’t want anyone to get left behind.”

She ensured the class participants that, although they are definitely a change, the new devices should greatly improve how the voting process works.

“From a personal experience, when my husband voted in 2016, once he got inside the building, even though there was a huge turnout and everyone was outside for a while, he said once he got inside it was the smoothest, quickest voting process he’s ever been through,” Brooks said.

The program was then taken over by Daniel Peters of KNOWiNK, the company behind the new Poll Pads. Before walking participants through the process of setting it up, he touched on the point of reluctance to change that can come from those who had worked in polls before.

“The poll pad itself is going to eliminate the alphabetical lines, so if you’re at one location and all the Smiths show up at once, they’re not going to have to stand in a line while anybody with X,Y, Z is going to be able to walk right up and vote,” he explained. “It allows the line to move a lot faster which means the voters aren’t waiting in line in an hour … and they’re not angry by the time they get up to see you. Happier voters make your day a little bit easier.”

Then the training began and the future poll-workers were shown how the pads themselves were set up, booted on and used throughout the process. With the machine being no more than an iPad with specialty software loaded on, it was as simple as connecting a few pieces of plastic for the stand, ensuring the device was on and knowing how to walk the voter through the multi-tap sign-in process.

Judge Easlick attended the Poll Pad class before helping teach the class taken by all poll workers. She said that she considered the day a success and that the poll workers left more-than-equipped with the know-how on the new devices.

“Everyone I talked to after the class was very excited about the new system,” she said. “I think the company did a great job in explaining it all.”

LaFAYETTE — Late November in the United States is viewed by many citizens as a time to celebrate the union... read more