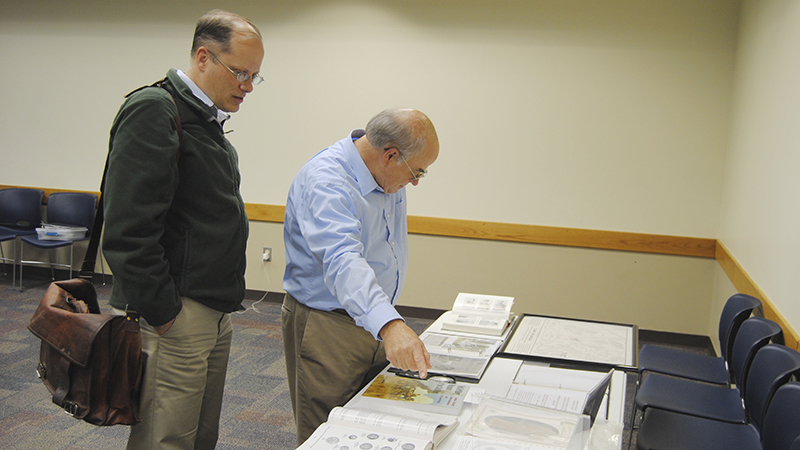 VALLEY — In the 1850s, the Georgia Military Institute, located in present-day Marietta, Georgia, was on its way toward becoming a well-known school for military training and could be as well-known today as VMI or The Citadel, had not the Civil War brought destruction to its doorstep. Every building on its campus, except for the superintendent’s house, was burned to the ground by Union troops in the 1864 Battle of Atlanta. There were several efforts to rebuild the school following the war, but they never took hold. A convention center is on the site today, and there are some cannons that once stood at the school to remind visitors of how the Atlanta area was devastated between July and September 1864.

University of West Georgia history professor Dr. Keith Bohannon was the guest speaker at Sunday afternoon’s quarterly meeting of the Chattahoochee Valley Historical Society and talked about GMI’s lost potential and some local connections to the ill-fated school. He said that there are two schools of thought on institutions such as GMI. The noted African-American historian John Hope Franklin (1915-2009) held that schools like GMI were supported by white southerners, especially in the years leading up to the Civil War, because they thought their young men needed military training in the event sectional conflict between north and south led to war. Another school of thought was that these schools were forerunners of what educators today call STEM education, for science, technology, engineering and math. While cadets were trained in military sciences such as infantry tactics and the use of artillery, the bulk of the instruction they received centered around science, technology, engineering and math. The intention was to train them to be civil engineers, whose job it was to build roads and bridges, not destroy them.

GMI was hardly a major four-year school by today’s standards. Dr. Bohannon said that there was somewhere between 150 and 200 students there in the mid to late 1850s.

The big difference between GMI and the state universities were the courses taught.

“The non-military colleges wanted to produce gentlemen,” Dr. Bohannon said. “The male students there would study Greek and Latin and would become doctors and lawyers. The military schools produced engineers.”

Being at a military school meant rigorous military drilling and study. “There was a high attrition rate,” Bohannon said. “Only 30 to 40 percent of the cadets would graduate. Many found out early that this wasn’t the kind of life they wanted.”

Many of the cadets came from the well-to-do families of the planter aristocracy, bankers, merchants and lawyers.

“Most were from the deep south,” Bohannon said.

The young men enjoyed interacting with young women from the local area at dances, which were commonly called hops. They frequently went to the state capital, Milledgeville, to impress state officials with their drilling. Funding for the school picked up in the late 1850s, as the region was heading toward war. This was especially true following the October 1859 raid by John Brown and his followers at a U.S. Arsenal at Harper’s Ferry, Virginia.

When the war began in the spring of 1861, some of the cadets dropped out to join the Confederate Army. In early 1862, the Confederate War Department started the first draft in U.S. history.

The Union followed soon afterward. Many Georgians saw GMI as something of a draft-dodger haven, especially since Gov. Joe Brown’s son, Julius, was a cadet there.

“Some of the cadets wanted to fight and left school to do it,” Bohannon said. “Some of their parents didn’t want their sons in the war.”

Bohannon said he was fascinated by a letter he’d found in his research. It was from a Confederate officer from Perry, Georgia. and addressed to CSA Vice-President Alexander Stephens, who was from Georgia.

“He complained that people he knew from Houston County were sending their sons to GMI to keep them out of the war and that he didn’t think that was right,” he said. “There was some degree of truth to that. On a list I found, 24 of 50 cadets who were 18 in 1860 were still there in 1862-63.”

By the spring of 1864, the war had come to Georgia. There was 150 young men in the GMI cadet corps at the time and GMI Superintendent Francis W. Capers sought out Gen. Joseph Johnston during the Battle of Resaca to see if they could join the fight. As Sherman’s army got closer, the cadets were evacuated, some going to Milledgeville and some going south to West Point to guard the railroad bridge over the Chattahoochee River.

While in West Point on June 23, 1864, the cadets were presented a battle flag that had been hand sewn by a woman from Burke County, Georgia, who urged them to follow the example of the VMI cadets, who had famously been a factor in a Confederate victory in the Battle of New Market, Virginia.

Not long after that, the cadets were seeing trench duty in the Battle of Atlanta. Some of them were killed, wounded or died of disease.

After Atlanta fell, the cadets became part of a force given the impossible task of resisting Sherman’s March to the Sea.

“They were part of a polyglot force that included deserters, old men and convicts who’d been released from prison,” Bohannon said.

“They defended a railroad bridge over the Oconee River,” he said. “They fought for a couple of days before being forced to withdraw. Some of the cadets were wounded, including John Scott Todd of West Point, who lost an arm,” he said.

Todd’s family owned land in Chambers County. It’s thought that Todd Addition in Valley got its name from the family.

Despite the loss of his arm, Scott became a respected physician in the Atlanta area after the war. The cadets had a strong sense of duty and did their best to do what they were ordered to. Even after Lee’s surrender, they were ordered to Augusta, Georgia to guard an armory from being looted by rioters. They were still doing that when federal forces arrived.

The Confederate flag was then lowered and the area was placed under the control of Union forces. A cadet did save the flag from being captured.

“He hid it under his shirt,” Bohannon said. “Part of it still exists today.”

Bohannon added that there were efforts to reopen GMI after the war. This would have meant rebuilding an entire campus.

“The entire south was devastated,” he said. “They couldn’t support it financially.”

The remaining remnants of GMI include the superintendent’s house and four cannons, that had been made in the north before the war. Each one displays the state seal and a Latin phrase. Two of them are on permanent display at the Georgia capitol, another at the Confederate cemetery in Marietta and one is in the convention center, which today occupies the former site of Brumby Hall, the main building on the GMI campus.