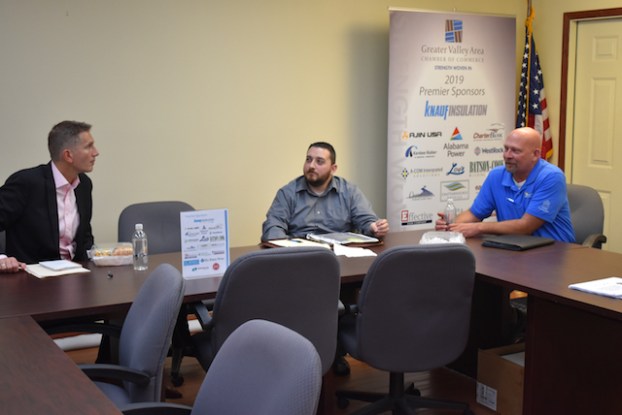 LANETT – If you have a great idea for a business but don’t have the funds to get it off the ground, a regional startup competition in the Greater Valley Area could be the remedy to your problem.

Arndt Siepmann, director of industrial development and Lucian Bifano, director of entrepreneurship strategy at Auburn University, stopped by the Greater Valley Area Chamber of Commerce office Tuesday to discuss the 2018-19 Auburn Regional Alabama Launchpad Startup Competition. The competition gives individuals interested in starting a business the chance to compete for $50,000 in prize money for the best ideas.

To participate in the competition, entrepreneurs must be from Chambers, Lee, Macon, Russell or Tallapoosa counties.

The contest is a smaller version of a statewide competition that’s been happening for 11 years to provide grants to startup businesses. Siepmann said typically the competition sees entries from larger cities in Alabama, but no so much in the rural areas.

“We wanted to create a regional competition to find players who otherwise wouldn’t know about it,” he said.

The contest is open to entries now and will stay open until Dec. 17. To enter, go to alabamalaunchpad.com and go through the application process. Individuals will need to create a YouNoodle account, pay a $150 application fee, submit a three-minute video and submit a business plan.

The applications will be sent to judges on Dec. 19 and finalists will be announced Feb. 1. On Feb. 11, there are a set of verbal presentations to a panel of judges, with a more comprehensive business plan presentation on Feb. 22.

The finals will be at Auburn University during a weeklong event, ending with the winners being selected March 27.

Bifano said businesses must be new, independent ventures in the pre-seed, seed, start-up or early growth stages. Existing businesses expanding into new markets could be eligible as well.

Throughout the process, Bifano said there are many individually scheduled mentoring sessions to help contestants strengthen their verbal pitch or business plan.

Siepmann told chamber members Tuesday the whole spirit of the competition is to promote economic development, job creation and entrepreneurship in the five-county area.

Ashley Crane, executive director of the chamber, said the contest opens up new possibilities for those interested in starting a business but feel they lack the capital to do so.

She said the areas has several small businesses in the restaurant and small clothing store realm, but this brings about new opportunities that haven’t been explored in the region.

“My hope is if we can get more involvement in this, it would create other small businesses,” Crane said. “Also, for people to start thinking about what it would be like to start a business when they otherwise wouldn’t.”

The competition is sponsored by the City of Auburn, Auburn University, Auburn Research, Technology Foundation and the Economic Development Partnership of Alabama.

Locals outdo themselves with Halloween decorations

HUGULEY — Anyone who would like to see a pumpkin-headed cowboy riding a giant spider rodeo style can check that... read more