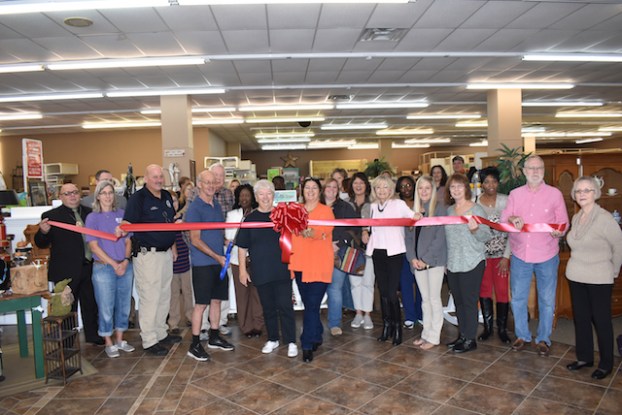 VALLEY — Melissa Woods never expected to open her own shop. However, an avid collector of antiques and odds-and-ends, something she lovingly refers to as “junking,” Woods realized she could turn her pastime into a full-time job.

“I wound up with enough items to fill up a hay barn, a horse barn and two bedrooms,” she said. “My husband asked what I would do with it all and one night at dinner I proudly announced that I would open a store.”

Although she lives in Pine Mountain, the store she has opened is located in Valley and is known as River Market Thrift at 345 Fob James Drive. Opened since the end of September, the store has reportedly been busy and, on Tuesday afternoon, held its grand opening as a new member of the Greater Valley Area Chamber of Commerce.

Chamber members and community leaders such as Valley’s Mayor Leonard Riley, Valley Police Chief Tommy Weldon and County Commissioner Debbie Wood watched as the ribbon was cut and the store officially became part of the area. Woods said that even before this, though, the community welcomed River Thrift with open arms.

“The store filled in three weeks with no advertising,” she said. “It was God’s hand at work because, I’ll tell you, I didn’t know anybody down here, I had not had an opportunity to start advertising, I just had people showing up at the door asking if they could open a booth.”

Now with a waiting list of people hoping to sell their wares, the store offers items that range from homemade goods, like soap and stained glass, to antiques scrounged from all corners of the South, to new items still shiny in their packaging.

“We want to be your headquarters for shopping and for that last-minute gift when you’re caught unexpected,” Woods said to the crowd.

Woods explained how she was able to design and furnish the store’s booths, thanks to a liquidation of Toys-R-Us dividers, shelves and even shopping carts. It wasn’t only items she got from the nationwide franchise closing, as she hired her “right-hand man” and assistant manager Mike Kindrick after working with him at the close-out.

“I was working at Toys-R-Us doing bike assemblies there, Melissa started coming in to buy the fixtures,” Kindrick said. “I helped her out and she asked me if I wanted to work with her here.”

Woods, Kindrick and Valley native and newest hire Penny Daniel tend to the customers and vendors alike daily, keeping the business, as they refer to it, booming.

“This place has just exploded,” Kindrick said. “We had no clue we were going to be this busy.”

Woods said that she is happy she could so easily transition into her role as a member of the community. She hopes to have regular events that will bring people out for fun and shopping, starting with a Christmas Celebration on Nov. 10 from 12:30 to close, featuring a pony, giveaways and Santa Claus himself.

Beulah football punches ticket to postseason for first time since 2007

BEULAH — The entire Beulah community celebrated its varsity football team this past weekend after the Bobcats defeated Dadeville 32-27... read more