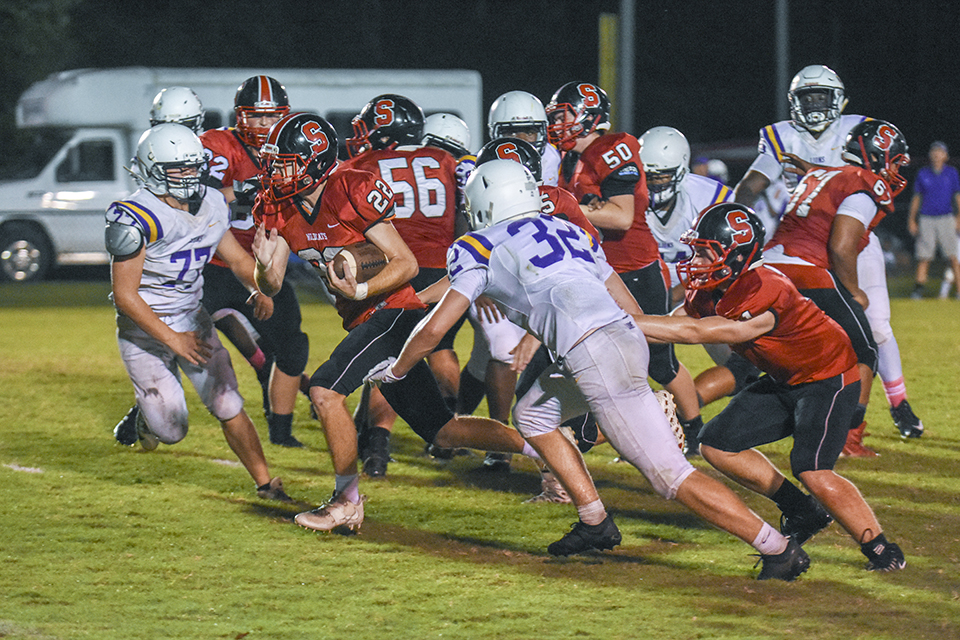 LANETT  — It was just the week that Springwood needed.

“[It’s] still not been good,” Springwood head football coach John Gatman said. “It’s kind of been the same thing all year. I think we’ve been sloppy, undisciplined, poorly-coached even in the games we won, including tonight. That’s just got to get better.”

Standout sophomore running back O.J. Tolbert opened up scoring for the night with a run to the right corner of the end zone with 5:21 to go in the first quarter.

It looked as if the Wildcats were going to continue building the momentum with 7:13 remaining in the second half when a pair of Wildcat defenders were in the mix to grab an interception. The near interception by Springwood ultimately ended up to be a tipped completed pass to Evangel Christian for a long touchdown. Evangel Christian was unsuccessful on the point after attempt.

Only around a minute later, Springwood quarterback Joran Plank completed a deep pass to Tolbert that moved the Wildcats inside of the 10-yard line. The long completion set up a Trent Craft touchdown to bring the Wildcats up 14-6.

The visitors from Evangel Christian did not go down without a fight as the team caught a touchdown pass with 4:40 to go in the second quarter. The Lions missed an opportunity to convert on extra points after that touchdown as well.

Coleman Hull scored at the third-quarter buzzer to increase the Wildcat lead to eight heading into the fourth.

Plank had another standout performance, as he grabbed an interception on defense with 10:03 remaining in the fourth quarter. Plank also threw the final touchdown of the game to an open Dylan Anderson with 3:17 to go in the ballgame.

“Jordan’s a good player,” Gartman said. “We started spreading it out a little bit more, I think he’s more comfortable in that type of offense than what we were doing in the Wing-T in the early part of the year. Still, we’re going to have to get better offensively overall as a team.”

Springwood has three “winnable” games left this season against Coosa Valley Academy, Lakeside and Lee-Scott Academy, Gartman said. The trio of games will either “make or break” the team’s playoff chances, according to the coach.

The team’s health will also be a concern as the regular season comes to a close.

Junior Chalyb Lenker was still on the sidelines wearing a cast on his hand, Ramseur was recovering from a lingering knee issue and Tolbert spent the second half on crutches for the Wildcats.

“It’s tough,” Gartman said of the injuries. “John Wadkins stepped in came in for us at inside linebacker and did a pretty good job for us on short notice. I was pleased with what he did. He’s a smart kid, plays hard. Losing O.J. hurt, not having Chris hurt, hopefully, we can have those guys back as soon as possible but we did have a couple guys step up that I was proud of.”

Senior Sam Leva was on the field after missing games earlier in the season. Leva led the Wildcats with eight tackles on the night.

Springwood will head on the road next week to face Coosa Valley Academy.