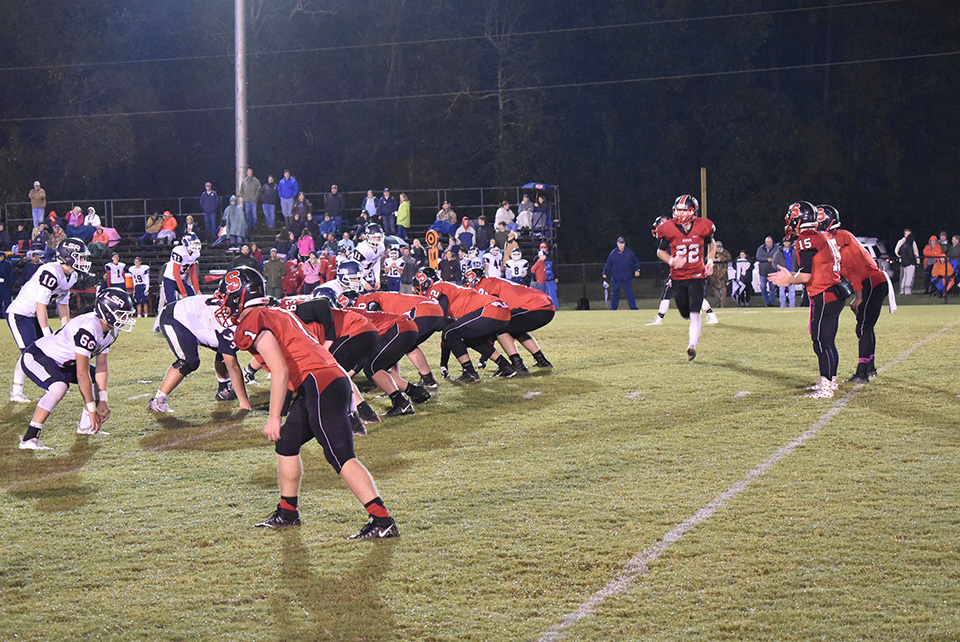 DRIVING WILDCATS: Springwood’s offensive unit lines up in the first half. Photo by Rashad Milligan

LANETT — Springwood finished its season with a 30-12 win Thursday night, but the Wildcats had to hang on after a quick start against 0-10 Lee-Scott.

Springwood got off to a 16-0 first-half lead after a breakaway touchdown run from sophomore O.J. Tolbert, a safety tackle by senior Sam Leva and a touchdown catch by senior Dylan Anderson.

After Springwood senior cheerleaders Maddie Johnson and Brady Parton performed for their final football game at halftime, Lee-Scott gave the Wildcats a run for the home team’s money.

The Warriors scored their first touchdown with 7:32 remaining in the third quarter and were unsuccessful attempting the two-point conversion after the score.

Despite Tolbert responding 40 seconds later with another 38-yard touchdown run of his own, the Warriors scored another touchdown on a drive where Lee-Scott completed a deep pass. The Warriors went for two again, in an attempt to cut the deficit to one touchdown, after the score, and fell unsuccessful again before the end of the quarter.

In one of the first plays in the fourth quarter, Springwood senior Trent Craft had a long run on a play where he trucked one of the Lee-Scott defenders before falling in the red zone. Craft scored on the next play.

Anderson enjoyed a big hit in one of Lee-Scott’s final drives of the game, and on the very next play, the senior grabbed an interception.

“For the most part, we played pretty well,” Springwood head football coach John Gartman said. “We did have some mistakes that were costly and had some mental lapses in the third quarter on defense. They [Springwood’s defense] gave them the opportunity to get a couple of touchdowns and we had a couple of other plays that weren’t so good, but it was probably our best game of the year overall.”

It was an ugly night for weather at the stadium, as temperatures hovered in the low 50s and rain showers started-and-stopped throughout the game. The Springwood faithful still showed up for the game, sitting under many umbrellas and tailgate tents to support the seniors.

After the game, many of the team’s seniors gave speeches to the underclassmen about their gratitude of playing in the program. Craft was overcome with emotion as the team broke the huddle one final time.

“I’ve been playing with these guys since my freshman year,” Craft said. “Just being able to finish that with them, it means a lot. It’s like family. Everyone here is really close.”

Many of the team’s standouts were in this year’s senior group for the Wildcats, including linemen Chris Ramseur and Leva.

Although the team was eliminated from playoff contention, Thursday’s win gave Springwood four wins this season, which is one more than last year. The Wildcats played under Gartman, who was hired a month before the team’s first game this season.

“Coach Gartman’s building this program, he’s going to build a great program here in the next few years,” Ramseur said. “I’m not going to be surprised if we’re playoff contenders or even going to state. I’m just so happy that he kept putting us in position to win these games, trusting the process, keep on working out and following what he had to say. I know Coach [Thomas] Hill was a great coach, and I loved playing for him, but Coach Gartman is a good coach too. I’m happy about how he was progressing and working us.”

Basketball season is up next for Springwood, a school that recently just wrapped up its cross country season as well. The cross country team was led by junior football athlete Chalyb Lenker, who finished third overall at the state meet.