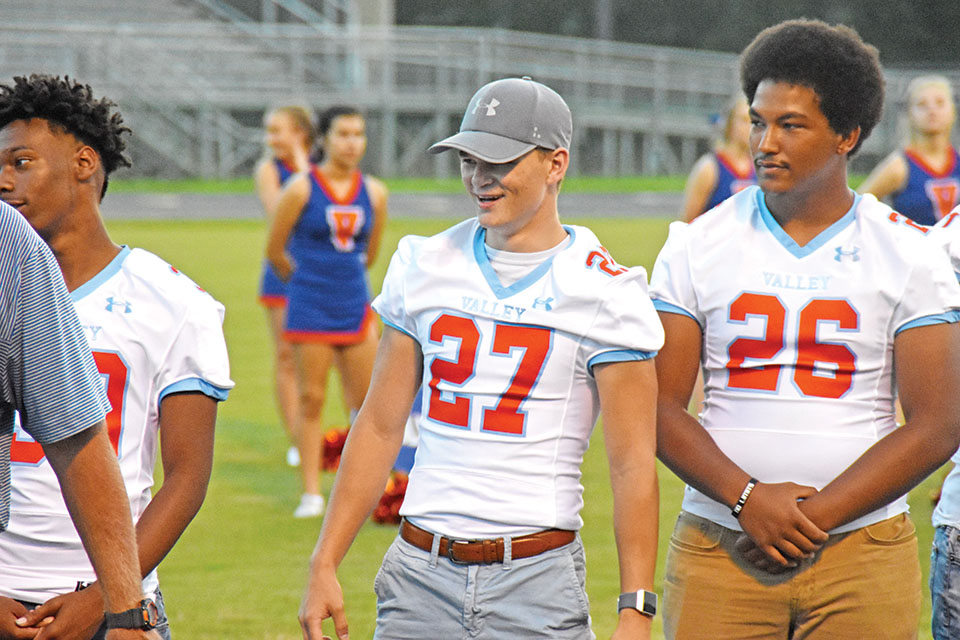 VALLEY — Daniel Etherton has come a long way from his freshman season as a kicker at Valley High School.

“The first time I ever got on the field, I forgot my helmet,” Etherton said. “Everybody was there, we had to call a timeout, I iced myself.”

On Wednesday afternoon following practice, Etherton found out that he was named this week’s Luis Zendejas Kicking Academy High School Kicker of the Week, an honor that is only awarded to one high school kicker in the country. Zendejas played with the Dallas Cowboys and Philadelphia Eagles for three seasons in the late 1980s and he currently works in the Arizona Cardinals’ front office.

“I feel really honored,” Etherton said. “I’ve followed him for a while, I’ve seen the people he’s given it to and I always thought it was out of reach.”

Despite going under the radar during this season’s local coverage, Etherton takes pride in his position on the field.

“I think kickers win games,” Etherton said. “I think it’s really demoralizing when a team has a good kick returner and don’t ever get to use him or they stop us on the 30-yard line and they think they’re going to get the ball back, but instead, we’re able to kick a field goal.”

The honor was only the latest for Etherton in the past 365 days.

Toward the end of last year, Etherton scored a 33 on his ACT, which allowed him to receive a full-ride to Auburn University. He’s ranked first in Valley’s 5A section for Javelin Throw and he also swims with the Valley swim team at the SportsPlex during summers.

He has a 4.7 weighted GPA and a 4.0 regular GPA. He has received one B in his career as an elementary student before he decided that he always wanted to be the best.

Currently, Etherton runs after football practices on Monday and Tuesday to train for cross country, which is also in season right now.

“I get back from the football game really late, then I wake up really early and then I go run really far,” he said. “And hopefully really quickly.”

The Rams football team has a 3-3 record just after the regular season’s midpoint, which is already one more win than the team had last season. Etherton remains confident that he can end his high school career on a high note.

“I think we’ve come a long way,” he said. “I honestly think that we have a very good chance of going to the playoffs. I think the coaches have helped a lot. Coach Daniel is doing a great job of turning this place around. The team last year and the team this year don’t even compare.”

His personal goal is to finish his career by scoring 100 points. He currently stands at 88 points with four games left in the regular season. Valley travels to Tallassee this Friday night to face the 3-2 Tigers.