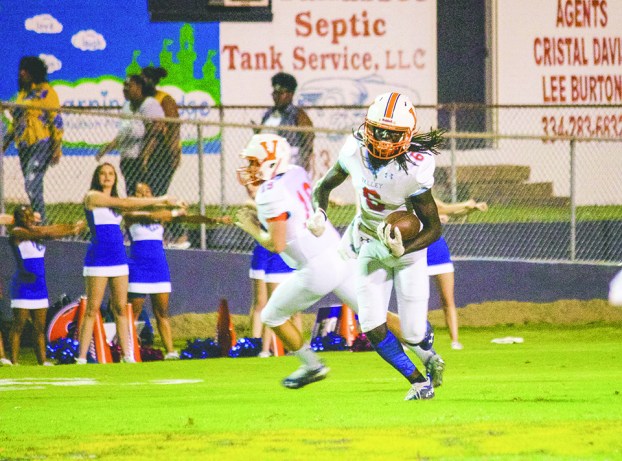 Valley shut out by Tallassee, 23-0

By Griffin Pritchard | The Tallassee Tribune

For the better part of four homecoming quarters Friday night, Tallassee physically imposed its will upon the visiting Valley Rams en route to a 23-0 victory. The win evens the series between the two historic rivals and avenges a 54-7 2011 loss.

Playing in front of their largest home crowd of the season, the Tigers held the Rams to 93 yards of total offense and sent their opponents into the bye week with more questions than answers.

Tallassee (4-2, 2-1 Class 5A Region 2) spent the first quarter of Friday’s affair focused and led by a defense that stood its ground and made the Rams offense an exercise in futility.

Darrell Dunn, who coach Tiger coach Mike Battles said was the key to the Valley offense, was rendered ineffective, amassing 36 yards on 13 carries.

Early in the first period, Dunn rattled off back-to-back 12-yard runs. Beyond that, his longest was six yards.

“We knew from watching previous games that he was the man and when he went to the quarterback, you better know where he is,” Battles said. “Our kids did a great job getting ready defensively. Our defense played lights out the whole game. They didn’t give Valley an inch.”

With 5:30 remaining, Valley left in the opening stanza threatened and moved the ball within the Tallassee 20 but had to back up following a holding penalty.

On second and long, quarterback Eli Culpepper’s pass was tipped and intercepted by Trent Cochran-Gill, who had another pick in the third quarter.

“I just went out there and played,” Cochran-Gill said. “This was a big game. It was an area game and a long-time rival.”

Tallassee jumped ahead 6-0 in the second quarter.

Quarterback Kalvin Levett completed a pair of passes to Matt Justiss then scored on an 8-yard run up the middle.

“I had a lot of fun tonight,” Levett said. “We knew they were going to keep us from going outside. So we had to work to run the ball inside. But we could tell they were getting tired.”

The 6-0 mark stood through the half as both teams traded possessions.

“We had a plan coming in,” Battles said. “In that first quarter, we had a hard time running inside and they were not going to let us run outside. They had already dictated that to us. But we had a hard time blocking those big guys (in the middle) and getting them out the way. So we had to come back and run some misdirection. But we were eventually to knock them back and get some runs out of the I (formation).

“At halftime, we were able to make some adjustments and were able to move the ball and get some sustained drives. But, when you have the defense playing like they were, you can take time and eventually something is going to work. We just had to figure out what it was.”

Tallassee came out of the intermission and immediately put the Rams (3-4, 1-3) on their heels. Quinton Jeter’s kickoff was mishandled by a Rams return man and recovered by Cody Kelley.

That led to a 21-yard Jeter field goal and a 9-0 Tallassee lead.

But the Tigers weren’t done there.

On the ensuing possession, Cochran-Gill snatched a Culpepper pass out of the sky and returned it to the Valley 16.

“They didn’t do anything different tonight than what we’d seen on film,” Daniel said. “They just outplayed us. They are a group of hardnosed kids who do things the right way. We didn’t do anything right. They didn’t take (Dunn) out of the game; it was everywhere. We didn’t block. We dropped passes. They came out in a Bear defense and that took us out of a lot of things we like to do.”

One play later, Markevious Mathews, who finished with 121 yards on 12 carries, scored on a 16-yard run.

“Our offensive line gets better every week,” Mathews said. “Coach Battles stays on them, but they get better. I love those guys. I couldn’t do anything without their work.”

Once Tallassee got the ground game going, they out-ran the Rams 217 yards to 43.

The Tigers added a final score in the fourth quarter when Matthews broke free on an 11-yard run for the score. Jeter added the point after moving the tally to 23-0.