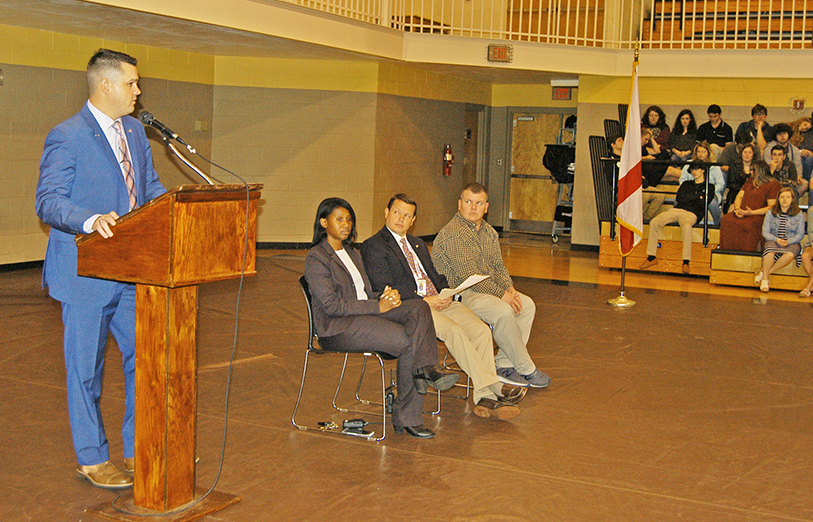 BEULAH, Ala. — A large group of veterans and their families were honored at a special Veterans Day program at Beulah High School on Thursday. They were seated in chairs on the gym floor and received loud applause as veterans of the U.S. Army, Navy, Marines and Air Force were asked to stand when the Beulah High band played their service song.

The warm reception given to the veterans followed an hour-long patriotic program featuring Beulah High students Ada Crim and Janet Langford, who performed a duet of Lee Greenwood’s “I’m Proud to be an American.” Another student quoted Thomas Paine’s famous statement – “These are the times that try men’s souls” – when discussing the sacrifices that were made for the American colonies to gain independence from England

The keynote speaker for the program was Todd Rauch, a U.S. Army veteran who was wounded in Iraq in 2003. In June, Rauch narrowly lost a run-off race to Debbie Wood for the Republican nomination for the District 38 seat in the Alabama House of Representatives.

Rauch told a large crowd inside the gym that he’d decided to join the Army when he was 17. His parents had to sign for him, and following high school graduation he was in basic training when the twin towers fell on Sept. 11, 2001.

“It wasn’t until Dec. 19, 2001 that I was allowed to see what had happened,” he said. “I knew then that the whole world was different and that I wanted to be a part of something that was greater than myself. What we have in the U.S. is unique. Freedom in our country is for everyone. We are so blessed to have tragedies that are so rare that they make big news when they happen. It’s not that way in some parts of the world.”

The blast knocked everyone unconscious but Rauch. Dazed, he was still on his feet, and at six-feet-four in height was an inviting target for enemy gunners. The blast had wounded his hand and his rotator cuff, but somehow he needed to return fire.

“My rifle had been split in two,” he said. “I couldn’t use it. All I had was a 15-round pistol, and I needed every single bullet to hold them off.”

Rauch lost part of his hand and sustained permanent damage to his rotator cuff.

“I knew my life had changed,” he said. “I knew I could no longer be a soldier, but I knew that God had put me on this earth to serve my country.”

Rauch was sent back to the U.S. and went through a period of extensive rehab at Walter Reed Hospital in Washington, D.C. During his recovery, he knew he’d have to take a new path in life.

Rauch later earned a degree in psychology from Auburn University. He has since worked in U.S. Army intelligence and for various veteran causes.

Rauch said he loves being with fellow veterans and sharing stories with them. He said that World War I ended 100 years ago this Sunday and that all those who served in that Great War have long since gone. The numbers of those who served in WW II and in Korea are rapidly dwindling.

“While we still have them, we need to listen to their stories,” Rauch said. “We need to learn of what they went through. Though terrifying at the time, I know they would go through it again in a heartbeat if called upon. We need to pass on what they lived through. When they are gone, no one else can pass on the stories they have.”

Rauch encouraged students in the crowd to consider a military career after high school.

The program ended with a moment of silence while a member of the Beulah band played taps.