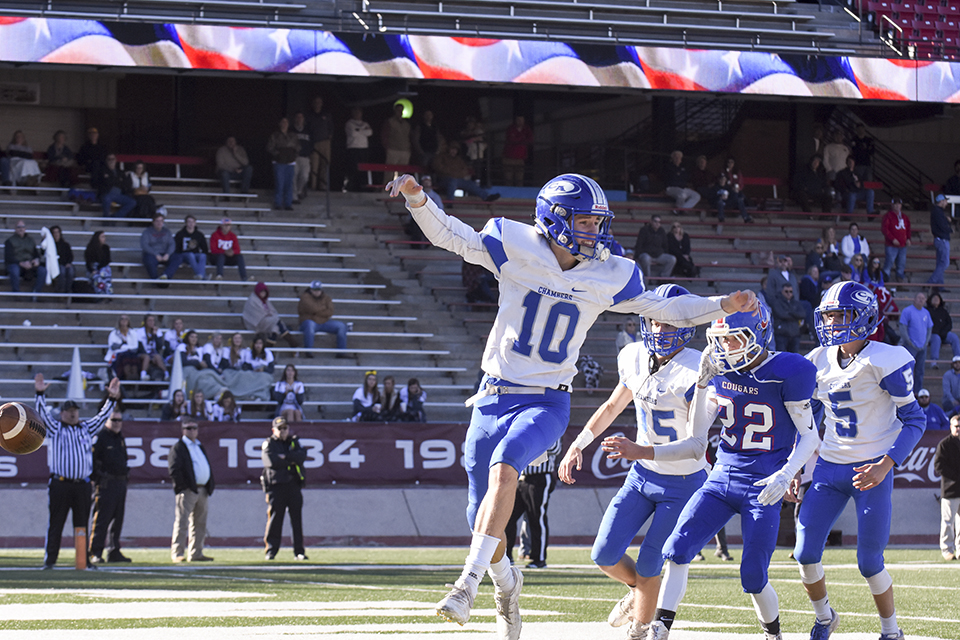 TROY — The breakthrough has finally come.

In his seventh state championship game as a coach, and his fourth straight year leading Chambers Academy to the final day of the season, Jason Allen, and his Rebels are champions after defeating Crenshaw 22-12 on Friday afternoon.

“[I feel] very relieved,” Coach Allen said. “If we would’ve lost, we would’ve been like Mark Levy and the Buffalo Bills. We had to make sure we got this one. This is all of the coaching staff, our players have done a fantastic job. It’s been an unbelievable season, it’s the 50th season anniversary of our school, and to win our first state championship, this is unbelievable, this is God’s timing.”

Chambers Academy held on to an early lead thanks to senior running back C.J. Lyons successfully converting a pair of two-point conversions after early touchdowns from Jordan Gillespie and a goal-line sneak from sophomore quarterback Payton Allen.

The tension throughout the Rebel fan section grew in the second half once Crenshaw began consistently driving down in the field, ultimately narrowing Chambers’ lead to four points with 8:43 remaining in the fourth quarter.

Lyons, who was on the last two Rebel teams that lost by a total of three points in the last two state championship games, admitted that at that moment, he had a slight case of deja vu.

Lyons took matters into his own hands on the ensuing Chambers offensive possession. The senior earned two monumental back-to-back first downs down the stretch in moments when the team was looking to run the clock down.

“They had us pinned up for a little while, but you just have to keep pushing,” Lyons said. “I had to keep pushing, keep everybody on their toes, and keep them ready because anybody can get down there at any time. It felt great to get those two first downs.”

It was at that moment that Lyons set up the biggest play in school history.

With 6:01 remaining in the final quarter, Payton Allen hit a hole, and scrambled his way into the end zone to give the Rebels a two-score lead.

“It was awesome,” Payton Allen said. “They were keying in on C.J., our guys did a great job of blocking, and I just ran. It was all them, they did a great job.”

The championship ends the season when Chambers Academy’s defense allowed its fewest points in school history.

Seniors Hayden Harris and Alston Knox were banged up in the matchup, but the two athletes still embraced the final game of their high school careers.

Defensive leaders and junior Braxton Allen and Brody Smoot were two of the more emotional players celebrating the win on the field. The defensive duo, and Payton Allen are among next season’s projected returners. For now, however? The team isn’t taking the current victory for granted.