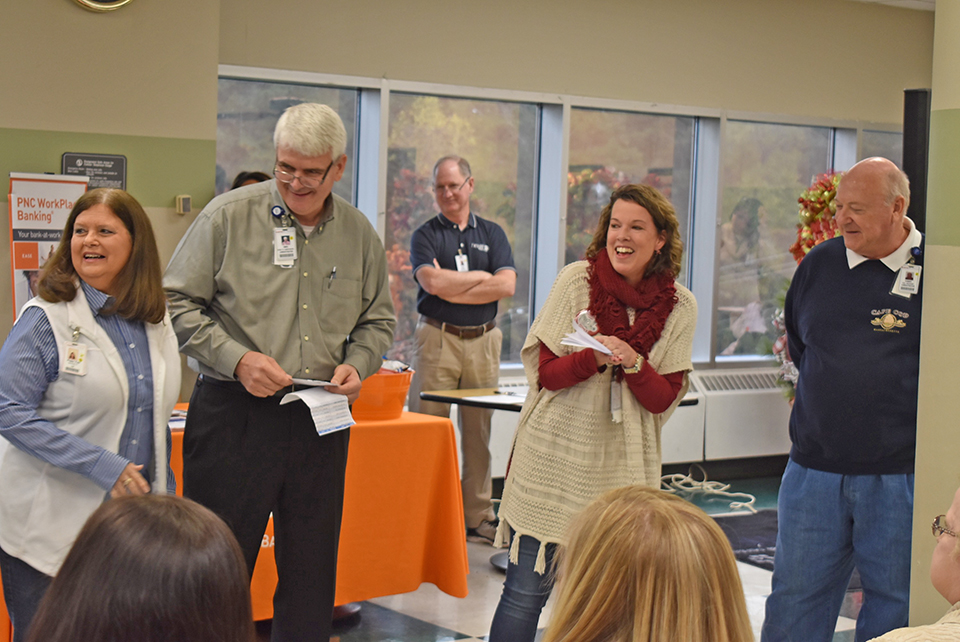 EAMC-Lanier officials Greg Nichols, Eve Milner and Tommy Lane commend Peggy Farr on having been employed by the hospital for 40 years.

VALLEY — EAMC-Lanier Hospital hosted an employee appreciation luncheon during the noon hour on Thursday. All employees were treated to box lunches from Chick-fil-A in the cafeteria and long-time employees were recognized for their years of service.

“We appreciate our employees so much,” said Administrator Greg Nichols. “We had hoped to have a fall celebration outdoors in our courtyard area, but with the rainy weather we decided it would be better to have it indoors in the cafeteria.”

There was the feel of Christmas inside the cafeteria. There was a large Christmas tree, lots of red and green and plenty of smiling faces. Employees who have served for 30, 35 and 40 years were recognized with special presentations.

They included Jackie Avery, and David Maddux, both of whom have been with the hospital for 30 years; Paz Pedrozo, James Widner, Birutha “Beebee” Hemberg, and Dorothy Potter, all of whom have served for 35 years, and Peggy Farr, who has been with EAMC-Lanier for 40 years.

Avery has been a certified nursing assistant (CNA) at the nursing home for three decades now. “We are blessed to have had her,” said Eve Milner, vice president of clinical services. “She is so good with the residents.”

Maddux is a security officer. “He is such a dedicated, dependable employee,” said Tommy Lane, vice president of operations. “He is so good at de-escalating situations before they get out of hand.”

“We are proud to have had Paz for 35 years now,” said Milner. “She is a registered nurse and works here with her sister. They are so good at giving the patients baths, and that’s not easy to do.”

Widner is in the hospital’s mechanical department. “He’s so dependable,” Lane said. “He’s never out of work, and everyone loves him.”

Hemberg has done a little of everything in her 35 years at EAMC-Lanier. “She’s like a mom to us. She keeps us on our toes,” Milner said. “She’s done infection control in he past and is now the night shift supervisor.”

Milner said that Dorothy Potter had worked in just about every department in her 35 years at the hospital.

She’s been a PRN and is now a registered nurse. “She’s real good,” Milner said. “She keeps everybody straight.”

Potter said she’s like to be at EAMC-Lanier for another 35 years.

An administrative secretary, Peggy Farr was described as the face of the hospital’s lab. “She handles drug screening and other confidential tasks,” Milner said. “She’s super professional. Everyone likes her because she keeps us in a festive mood, in a holiday spirit.”

Lane said it’s also a plus that she’s an Auburn fan.

With an estimated 450 employees, EAMC-Lanier is one of Chambers County’s major employers and has a significant economic impact in the county.