LaFayette gets first round win, will host second round Friday 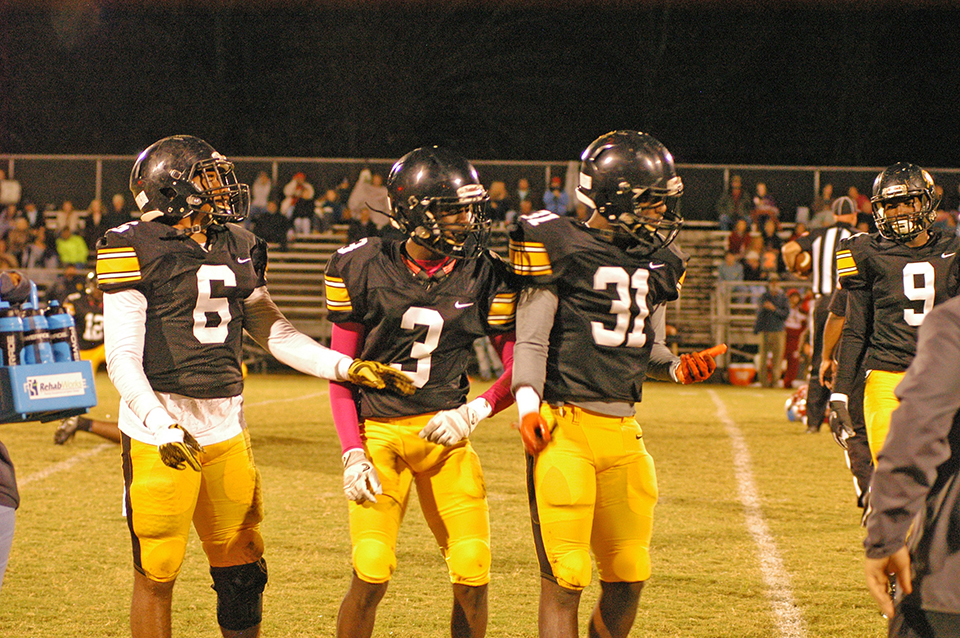 DEFENSIVE WALL: LaFayette defenders, from left, junior Zachaeus Turner, junior Xavier Holloway, junior Dai’Quan Giddens, and senior JaQuavian Boston-Gaines all helped in shutting out their opponents in the first round of the playoffs last Friday night. Photo by Wayne Clark

HARTFORD — The hard-hitting, defensive-minded Bulldogs of LaFayette High School are back at home this week after a dominant win over Geneva County.

The 40-0 victory over Geneva now has LaFayette in the second round of the playoffs for the third season in a row.

“We talked about executing, game planning and doing your assignments,” LaFayette head football coach James Lucas said. “That’s what we tell our kids when we give them the game plan, and we tell them to finish. They did all three phases of the game on Friday night. I tell them all the time at the end of the game that the scoreboard will reflect how you played. Forty to nothing shows that they executed in all phases of the game.”

Senior quarterback Jae’Lin McCurdy led the charge with three touchdown passes for 153 yards, completing 10-of-15 passing attempts. Junior running back V.J. Tolbert had 10 carries for 143 yards and a touchdown. Junior Keandrae Peterson had a touchdown on the ground as well as a receiving touchdown. Junior Jordan Walker had a touchdown reception, while sophomore JaMariae Daniel grabbed another touchdown in the effort. The offense generated a total of 438 yards passing and rushing combined.

On the defensive side of the ball, seniors Trevor Vines and Doug Bryant had 10 tackles each. Senior JaQuavian Boston-Gaines had nine tackles. Junior Zachaeus Turner and Dai’Quan Giddens both stepped up for LaFayette as well. Sophomore Ty Daniel and Walker each grabbed an interception in the secondary.

Including the end of the regular season, the Bulldogs have now won six games in a row, but now face its toughest challenge yet in the streak against 2A No. 5-ranked Highland Home. The Flying Squadron is coming off of a 63-28 round one win against Chickasaw. Highland Home is 10-1 overall this season.

“They’re a very talented group of kids,” Lucas said. “Their coach uses the spread (offense), and they do a great job of running and throwing the football. They’ve got two seniors in the backfield [running back Nakeldrick Hall and quarterback Daniel Phillips], so what we’re trying to do is maintain leverage.”

This marks the first time LaFayette is hosting a second-round playoff game since 2016 when the Bulldogs defeated Sheffield 40-34. LaFayette has a 4-1 home record this season.

“It’s always great to play among your fans, your community and your student body,” Lucas said. “It’s always a great place to be in at the Dog Pound. We want to make sure that we perform at the expectation that everybody’s looking for.”