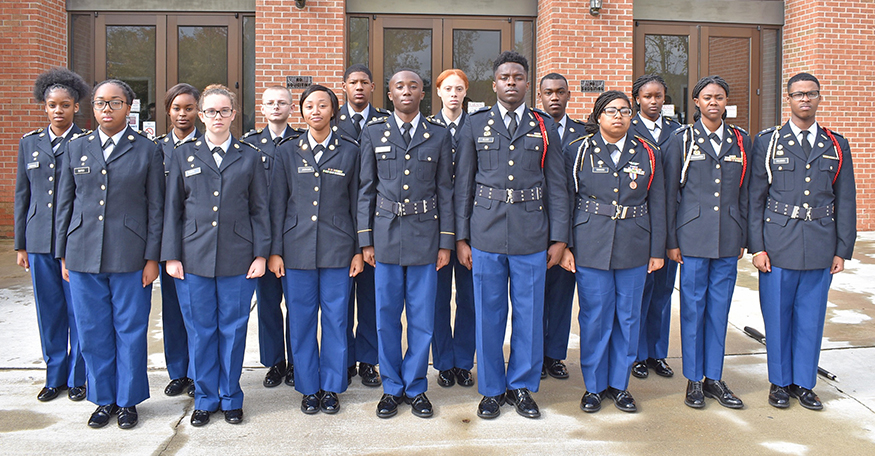 LANETT — In a Veteran’s Day program at city hall on Friday afternoon, Lanett city officials honored all U.S. veterans calling special attention to 17 current city employees who served in a branch of service before coming to work for the city.

“Veteran’s Day is a day for us to  think about and remember our veterans and the sacrifices they have made,” said Mayor Kyle McCoy. “We have the freedoms we enjoy today because of those sacrifices. One of those freedoms is voting. We can disagree on politics, but we respect the freedom to disagree. As we honor veterans of all our past wars this time of year we must honor those who are still serving both at home and abroad.”

The program began with Major Johnny Wood of the Lanett Police Department leading every in the Pledge of Allegiance and Hannah Thrower, daughter of LFD’s Sam Thrower, doing an powerful solo of the National Anthem.

The speaker for the day, Lr. Lewis Hill, served in the U.S. Navy before starting his career in law enforcement. He worked in several other local departments prior to coming to Lanett. Hill said it was an honor for him to be asked to speak, especially on the topic of Veteran’s Day. “We are here today to honor our service members, to remember their sacrifices and salute the courage they had to defend duty, honor and country,” he said. “We are here to honor our heroes, to remember their achievements, their courage and their dedication and to say thank you. Thinking of the heroes who are here today with us and those who are here only in spirit, a person can’t help but feel awed by the enormity of what we encounter. We stand in the midst of patriots and the family and friends of those who have nobly served.”

Hill asked for those who had served in the military to stand and be recognized. While they were receiving some extended applause, Hill said that these men and the other Americans they served with shared some basic qualities. “They possessed courage, pride, determination, selflessness, dedication to duty and integrity – all of what’s needed to serve a cause larger than one’s self. Many veterans didn’t ask to leave their homes and fight on distant battlefields. Many didn’t even volunteer. They didn’t go to war because they loved fighting. They were called to be a part of something bigger than  themselves. They were ordinary people who responded in extraordinary ways in extreme times. They rose to the nation’s call because they wanted to protect a nation that had given them so much.”

Hill said that Americans enjoy a special kind of freedom. “That’s why we must defend it,” he said. “The defense of freedom is not just for those in the military; each of us shares that duty and that responsibility. We don’t have to join the Army, the Navy or any other branch of service to actively defend our way of life. We can protect freedom simply by maintaining it in America.”

Preserving freedom, said Hill, can be done by participating in elections or in speaking out against injustice. “We must ensures that everyone feels the benefits of freedom,” Hill said. “We can do that by volunteering in our communities and teaching children what it really means to be an American.”

“Veteran’s Day isn’t a day just for veterans,” Hill concluded. “It’s a day for all Americans. It’s a day to remember why they were fighting and a day for us to begin our journey of protecting our freedom and the freedom of many future generations.”

The program concluded with Gary Harris playing taps on the trumpet. Mayor McCoy and Council Members Angelia Thomas and Jamie Heard presented each of the 17 veterans who work for the city certificates of appreciation. Other veterans present also received certificates.